The weather is still pretty inclement around here.  We did do a little birding 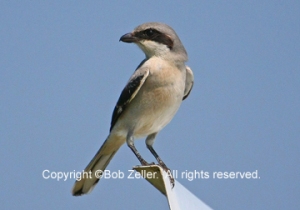 from our van yesterday morning after feeding the birds.  We saw our first Loggerhead Shrike of the season.  After that we went home and I framed two more prints to display at Kenny Blanek’s Village Cafe.  If you haven’t been there, Kenny lets me hang a few pictures there, then he sells them for me.

Earlier I mentioned that I would talk a little about photo editing software.  My personal preference is Photoshop Elements.  For two reasons.  One, it is a lot cheaper than Photoshop CS4, but contains a lot of it’s features.  Second, I don’t want to pay those big bucks for Photoshop CS4.

I don’t use my photo editing programs to do any kind of digital gimmickry.  I do the same thing that I would do with a regular darkroom, except I keep my hands cleaner, not having to mess with chemicals.  I usually check my photos, for the right lighting, contrast, and color correction.  However, if when composing a picture through the view finder, if there is an unwanted 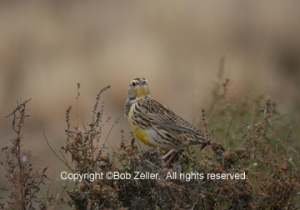 element in there that I can’t physically remove, I will clone it out digitally.  Of course, in the chemical darkroom, I would do that anyway.

Here are two photos of a Western Meadowlark that I took a couple of years ago.  The first one is the original file.  The second is the cropped and edited version.  You can see that I like to crop tight for good close-ups, and then give the picture more snap with adding contrast and adjusting the color. 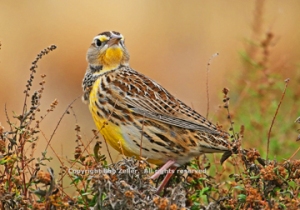 When these photos were taken, I was still shooting in the JPEG format.  Since then, I have changed to shooting in the RAW format.  Photoshop Elements 7 and the new and latest version, Photoshop Elements 8, make the RAW conversion very easy.  RAW gives you much more detail in the shadows and better tonality.  But to use the photo you have to convert it to JPEG, Tiff, or other formats.

Now for the birder that isn’t into photography for arts sake, expensive editing software isn’t necessary.  But you would want some way to store the images and print them.  So there are some very inexpensive programs out there.