Actually, we never went anywhere.  It’s just that I’m back to my blog again.  We received disappointing news from some friends, then literally minutes later we received news that an acqaintance had died in a car crash, along with her mother.  That made us think that, hey, life is too short to worry about little things.  So we made the best of the Thanksgiving weekend.  Ann cooked up a great meal for us.

We bought a Wii game thingee so we could get more excercise.  I almost got more than I bargained for, as we decided to try the bowling game.  That is Ann’s favorite.  Anyway, I thought I pulled a ham-string.  I know, that sounds hilarious, but the game feels so realistic, it’s amazing.  But after I got my groove back, I waxed Ann pretty good.  Ha! Ha!

We got out to San Angelo State Park for a little birding on Saturday.  The weather was really nice.  We spotted that elusive Harris’s Hawk again.  We watched him soar up and down this little valley area, always swooping near the ground.  At one point, a Northern Harrier entered the picture, trying to invade the hawk’s territory.  The Harris’s Hawk wouldn’t have any of that, and soon the Harrier left the area.

The hawk then left for another area, and I tried to follow him, around but I was always too far away to keep him in sight.  So I had to give up again, from trying to get a photograph.

On another subject, Suzanne Johnson sent me these two photos of a bird that she spotted near the water treatment ponds at Eldorado.  She has no idea what they are, and neither do I.  Does anyone have any ideas??  The wings seem to have a bluish tint to them. 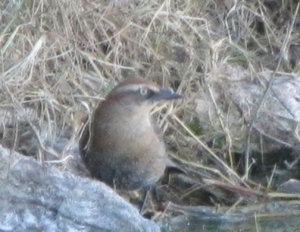