Last night Ann and I attended a Christmas Party for the Park Staff, Park Hosts, and board members of Friends of the State Park. and special guests.  We were special guests, as we don’t fit into the above categories.  The food was great and it was fun.  However, I was very disappointed about one thing.  The invitations specified that attendees each bring one bag of sunflower seeds to use at the bird blind.  Bird feed is an expensive proposition so any help the park can get in that area is really appreciated.

There were at least 50 people in attendance, yet there were only 6 bags of seed donated.  I think that is appalling, since most of the people were board members of the Friends of SA State Park.  So if you are reading this and donated in another way, that is nice.  If you didn’t leave anything, shame on you.  And you know who you are.

I visited with Kurt Kemp, the park manager, while sitting at his table.  He reported that the White-tailed Deer harvest was quite low compared to previous years.  He attributed the lack of hunters’ success to the very rainy year that we had.  He feels that the deer just were’nt hungry enough to come in to the deer blinds that were set aside for the event. 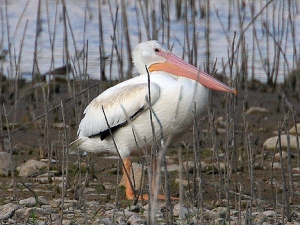 Yesterday afternoon while the sun was shining, Ann and I took a drive through the park.  The lake level is further down, and the shore line is getting further away.  However, what water is left is still attracting lots of water birds.   We saw several hundred of Ring-billed Gulls, Cormorants, Coots, and one lone American White Pelican.  There are still alot of Meadowlarks hanging around, but I think the Harris’s Hawk has left the building.