We watched America’s Got Talent last night.  It is one of Ann’s and my favorite reality talent shows.  You never know what you are going to see there.  From the idiotic to the fantastic, and everything in between.

Heck, I’ve got talent.  I could have been there if they had such programs when I was young.  But of course, I would have had to settle for radio, maybe getting on that program “Amateur Hour”.   My mother always told people that I could sing “Shanty Town” before I could walk.  Of course, that is utterly ridiculous.  In my memory it was “Fly Me To The Moon. 🙂

I really was blessed with a musical talent.  And for the first 55-60 years of my life it certainly was a large part of it.  Starting in the first grade I was a natural for singing.  I think I was about eight years old when I decided I wanted to play a musical instrument.  My parents took me to Berman’s Music Store in Muskegon,Michigan and told me to pick one out.  I had no idea what I wanted, but picked out a saxophone with all those shiny keys and said “it looks like will be fun to play”.  And a star was born. 🙂

I was about 12 when another older school friend, Ken Twining” asked me to 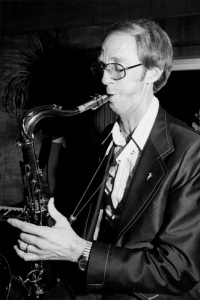 play in his band for a school dance.  I think I was paid four dollars  for the night.  I even made my first public debut as a vocalist, singing “Because of You”.  My knees were knocking but all the little girls went “Woo Woo”.  I decided then that the music life was for me. 🙂

At fifteen I was playing with a 17 piece dance band,  Morrie Bechtel and His Orchestra, and touring western Michigan.  You must remember that through all this I still was in high school.  We didn’t have any stage bands like they have in the present schools.  I played in the high school band and Muskegon High School had one of the best bands in the state.  William Stewert, Jr. was the band leader and he was very, very strict.  And worst of all, disliked dance band music, and anyone that played it.

So, as one can predict, eventually he and I got crossed.  The high school band was having evening rehearsals for a major concert that was coming up.  Well, heck, I had a gig.  My combo was playing at Ted’s Night Club, and I wasn’t about to turn down the big bucks.  The next morning at high school band rehearsal, at school, in front of all the other school kids, Mr. Stewert said, “Mr. Zeller, we can no longer use your services”.   So that ended my days at Muskgon High School.  At that time, music was my life, and I didn’t want to stay in school.  As a foot-note, I did finish my high school education in later years.

So I continued with my music career with the big bands and some smaller groups.  After entering the Air Force I got stationed at Reno Nevada.  I had a little jazz quartet that played at the Siamese Lounge in the evenings.  When I wasn’t booked I would go to a place called the El Rancho or something like that.  It was an after hours place where musicans could get together after their regular gigs and jam until early morning.

In 1956 I got transferred to Ardmore AFB at Ardmore, Oklahome.  There I got hooked up with some western musicians.  What a blast that was.  After I got through with it, western swing was never the same again.  Me and my rockin’ sax with all them guitars.  Shades of Boots Randolph!  Yakitty Sax all the way!  About that time Judy Lynn came to Ardmore with the Grand Ole Oprey show.  Brenda Lee was on the show.  She was only ten years old at the time, and had been on the Perry Como show just a few weeks before.  Anyway, I was invited to play on the show with the accompanying country band.  Judy Lynn wanted me to up and go with her to finish the tour.  I had to decline as I was still obligated o the U. S. Air Force.  But thanks for asking.

From Ardmore I went to Karamursel, Turkey which was a short boat trip over the Sea of Marmara to Istanbul.  While there I played in clubs in Istanbul, on the air base at Karamursel, then also down at Golcuk submarine base.  Lots of great stories there but they will have to wait.

When I got to San Angelo in 1961 I decided I could play jazz, big  band or western.  What ever was wanted.  The Cavalliers, a local band, wanted me to play with them.  They played rock-a-billy I guess you would call it.  We needed a singer, so we auditioned a guy by the name of J. Frank Wilson.  We worked with him so he would fit in.  Then someone, I don’t recall, wrote the song “Last Kiss”.  Frank was a natural for it.  We contacted a recording company and the Cavalliers with J. Frank went to Nashville and made a record that was the top of the nation charts for several months.  I, unfortunately, was not on the record.  By that time I had been discharged from the Air Force for medical reasons and had a day job as head bookkeeper for the Lake View School District.  I was unable to make the trip to Nashville.

To be continued, that is, if I get in the mood to tell stories later. 🙂

So what does all this have to with birding and photography.  Heck, danged if I know.  🙂