I and Ann decided to take the trip to Ballinger, Texas to see the fledgling hawk that Ken Coley had reported.  Actually, we took Ken with us.  Sure enough, right outside the northern city limits  there was a hawk’s nest on the cross bar of a power pole about 500 yards off the highway.  The adult bird wasn’t there but the fledge was standing on the nest.  I set up my camera and tripod to get some shots.  From what I can see in the photo, posted here, I believe it to be a fledgling Swainson’s Hawk.  Ken concurred with that, except that he thought that the adult resembled a Red-tailed.  Possibly a light southwest morph.  If any of you have any opinion about this, let me know what you think.  The photo is poor quality because of the great distance. 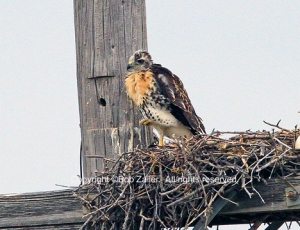 During the trip which took us two hours to drive the 30 miles, (hey we’re birders, for crying out loud)  we saw a lifer for all three of us.  It was a Dickcissel.  A very pretty bird.  But also a very tiny one, and from 100 yards the image I got wasn’t very great, but enough to make a positive ID.  Check it out here.

In other news Terry Maxwell e-mailed us that Jay Packer and his wife, Amy, spotted a Caspian Tern at O. C. Fisher Lake.  It is the first one spotted since a pair of them was seen in 2005.  I took my spotting scope out there this morning to see if it was still around.  But, maybe because of it being hot and windy, there was nary a bird to be seen along the shoreline except for a Great Blue Heron and a few Cormorants.