I’m not usually into butterflies much.  I guess that’s because I never paid a lot of attention to them.  I don’t know why, as they are beautiful creaatures.  I was watching the birds at the San Angelo State Park wildlife viewing area this morning.  Right outside the window is a plant of Yellow Lantana and as I watched, this butterfly, later identified as a Gulf Fritillary landed on it.  It took it’s time, going from blossom to another.

He (or she?) was only about eight feet away.  I decided to try and get a good sharp picture, maybe freeze the action.  I turnd on my on-camera flash, set the aperture at f16 and took the shot.  The shutter speed was only 1/250 per sec, but the flash duration was much higher and that is what got the sharp image.  I am very pleased with the result. 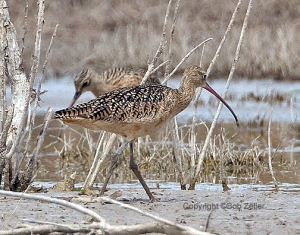 My wife and I are still starting to see more shorebirds at O. C. Fisher lake.  Great Blue Herons, American Avocets, Black-necked Stilts, and some sandpipers that are too far away to identify.  Soon there will be more species like the Long-billed Curlew, White-faced Ibises, Pelicans, etc.  Hopefully it won’t be too long, as I am geting impatient.

In other news, my Epson R1800 Stylus Photo printer was giving me problems for awhile, so I thought maybe it was time for a new one.  I ordered and received a new R1900.  I unpacked it this afternoon and got it running.  It is doing an excellent job.  However, during the interim while waiting for the new one, I corrected the problem on the old R1800.  Instead of shipping the new one back I decided to keep it.  I will keep the old one as a back-up unless I dispose of it by selling it.