I have been ask hundreds of times about the Big Bend.  I guess because Ann and I have made so many trips to Big Bend National Park, they think we have all the answers.  Not so, but thank you for asking.  Anyway, I thought it would be a great idea to do a series on beautiful place. 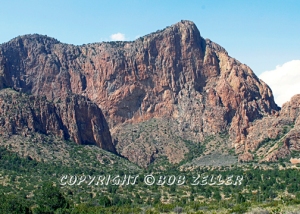 When I say the Big Bend, I am not just talking about Big Bend National Park.  I am thinking about all it encompasses.  There is BBNP, of course, but there is also Big Bend Ranch State Park, a gigantic and isolated destination east of the National Park.  There is Alpine, Marfa, Marathon that are all a part of the Big Bend.  The area is so named for the bend that the Rio Grande River makes, as it goes southeasterly down to Lajitas, then bends northeasterly after it goes through Santa Elena Canyon.

The Chihuahuan Desert makes up most of the land area.  A desolate, lonely, isolated, and a deadly place for the un-initiated.  Do not take lightly the warnings about taking plenty of water, 4-wheel drive only,  dangerous hiking trails, bears, cougars.  People have died trying to walk across the desert during the high summer temperatures.  People have died getting to close to the rims of some canyons.  People have died by getting lost on the trails in the high country. 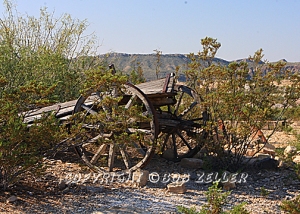 You can be mis-led by seemingly easy well meaning advice.  Such was the case when we tried hiking the Grapevine Hills Trail back in about 2004.  Our destination was the Rock Arch that lies somewhere near the end of the trail.  The brochure states that it is an easy hike of about a mile.  That much is true.  But when Ann and I tried it we found that, too late, that we didn’t prepare properly for it.

To begin with, you turn off the highway a few short miles west of the park headquarters at Panther Junction.  It is a very slow, rocky, road that goes 7 miles to the trail-head.   We made it that far in our mini-van.  It was sometime around mid-day when we started walking.  The temp was in the low 80s.   But the sun was beating down fiercely.  We had walking sticks made from the sotol plants.  We also had a bottle of water that we thought we could share, some cracker snacks, and I had a camera slung around my shoulder.

The trail was level for the first half mile, then started a gradual up grade.  There were makeshift signs directing hikers to the top of a rocky ridge where there was a vantage point to see the arch.  However, the “trail” was over huge boulders, that were up to house-sized.  Ann was not up to doing any climbing.   I, on the other hand, was after a picture and I thought I could make it easily.  I thought wrong.  I got started okay, but the climb got to be too much.  The temp was climbing by then, and with that terrible dry heat, I began to get dehydrated.  A very dangerous sign.  Fortunately, I met up with another hiker.  He saw the difficulty that I gotten myself into, and gave me some of his water.

I decided to wait for another time to get the Rock Arch photo.  I managed to climb back down to where Ann was waiting.  I tried to eat some of the crackers, but I was to dried out to do so.  I drank some more of our water then we started back to the trailhead.  We were hiking on a downgrade by then, away from the larger rocks.  About 50 feet into the walk, my feet slid from under me on loose gravel.  I started falling on my back.  As I did, my first thought was not to fall on my camera.  I yanked it around in front as I was falling and therefore, my arms were not able to break my fall.  My back landed squarely on a large round boulder.

It knocked the beejeebers out of me.  I was stunned.  Ann in a state of panic and screaming.  There was no one else around.  I gradually got my breath back, but I knew I was hurt bad.  I told Ann that I was okay, and with the help of my walking stick I regained my feet.  Somehow, we managed to limp that mile back to the trailhead.  The person that had gave me the water and had left earlier, was waiting by his truck.  He thought that we may have trouble and was there just in case we didn’t get back.  A very thoughtful individual who knew about the dangers in the Big Bend.

I still had to drive that 7-mile trip back to the highway.  Every bump made the pain worse.  I figured that I could make it to the medics at Study Butte.  Not so, the building was closed.  We were staying at Lajitas, about 15 miles away, and I knew they had an infirmary there.  The doctor there, was actually a physicians assistant.  He checked me out, decided that I didn’t have any broken bones.  But he said that I would be begging for pain killers.  He prescribed four Advills, four times a day.  He was right.  I begged.

We left the next morning to come back to San Angelo.  By then the pain was almost unbearable, but I managed to somehow get in the passenger side, and find a good position.  I stayed in that position for 320 miles while Ann drove us back.  She had to help me get into and out of bed, and help me dress, but I recovered after about two weeks.

So, now when we do decide to take hikes, which are much shorter now, we make sure that we are prepared properly.

I began to make this into a series about visiting the Big Bend, how to get there, things to do, etc.  Well, after writing this much, actually winging it as I went along, I have come to decide that it will be a long, but exciting journey.  I can’t wait to write the next part.  I will probably try to write two or three parts per week.  We’ll see where it takes me……..:-)

In other news, I hung fourteen framed prints at the Crockett National Bank downtown across the street from the Visitors Center.  They will hang there at least through the end of December.  Please go down there, and see them any time during banking hours.

11 thoughts on “Big Bend Series, Part I – The Dangers”