The beautiful Conch River winds itself through downtown San Angelo, Texas.  I have not been down there in quite awhile, due to Ann’s and my responsibiities to the San Angelo State Park.  It seems activities there have taken over our lives to a certain extent.  Anyway, Friday evening an individual called me saying that he had seen some baby Black-crowned Night Herons perhaps nesting along the shore of the Concho River. 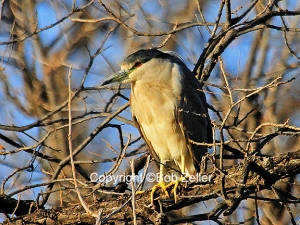 Ann and I decided to investigate, so we drove downtown the following morning to cruise along the river and observe.  We stopped near the location that the man had described over the telephone.  I immediately spotted an adult Black-crowned Night Heron up in a tree above the river.  About a hundred yards away there were two Great Blue Herons in another tree.  In still another tree were four Doubled-crested Cormorants.

I was surprised that there was so much bird activity along that river.  We didn’t see the young black-crowns unti were deciding to go home, then we spotted one juvenile sitting on a little dam at a low-water crossing.  Click on any of the images to see enlargements.  Below is a listing of the 12 birds that we saw along the river that morning.  We probably would have gotten many more if we could have stayed longer. 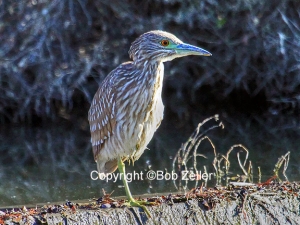