Yesterday as we were driving near the Concho River in Middle Concho Park, I spotted this Great Egret, (Ardea alba), hunting in the grass and reeds along the opposite bank, about 125 yards away.  I always love to photograph these magnificent birds.  I was able to swing the car along the river bank so I could get the images from my side window.  We watched (and photographed) him for several minutes, until he left for better hunting grounds.

Great Egret - on the hunt 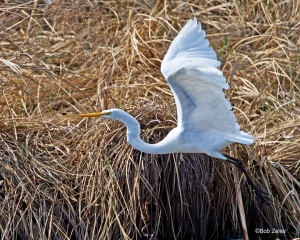 Disappointed to see the egret leave, we continued on.  After a while, we came upon this female Ladder-backed Woodpecker, (Picoides scalaris), hanging under a mesquite tree limb.  He seemed, and sounded, like he was quite busy.  I grabbed a few shots, then we went on our way and left her alone to do her feeding or hammering or whatever she was enjoying doing.

As we continued on our way around the park we saw several other species, though none that sparked my creative juices to photograph.  Then just as we were ready to leave I spotted this female Golden-fronted Woodpecker in the top of a tree, singing her heart out.  For this shot, I had been out of the car stretching my legs, and had my camera in hand. 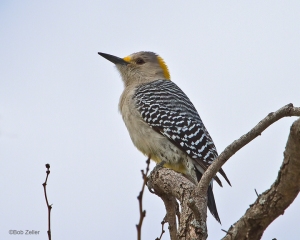 So ended another day of enjoying the outdoors and getting a few more photographs.  Click on any image to see an enlargement.

41 thoughts on “The Magnificent Great Egret”