We decided to take a drive to the North Shore side of San Angelo State Park.  We had received a cell phone call as we were heading for the South Shore.  It was Kim, one of the hosts at the north portion of the park.  She said that I might want to come over there and photograph a Yellow-headed Blackbird that was chasing around the prairie dog town.  Well, it was ten minutes away, and by the time we got there the blackbird was nowhere to be seen.

So we decided to just take a drive around there.  That area of the park has the North Concho River running through it.  You might say that the area is nicer than the south park area.  But I think it is because of the difference in the habitat there,  because of the huge, by west Texas standards, oak trees.  They, of course, are healthy because of the nearness of the river.  The south part, where I do most of my photography is more wild, with more mesquite, more cacti, etc.  The south portion, in addition, is about ten times larger than it’s northern counterpart.

But, to get back to my story, as we drove around we heard lots of birds singing, but they were hard to locate in the leaves of the larger trees.  But as we went through one are we spotted two adult Killdeer,(Charadrius vociferus),along with three chicks.  The chicks, who were only about four inches tall, were walking throught the grass, while the parents were going through their act, pretending to be crippled so as to draw us away from the kids. 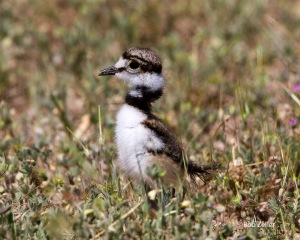 I don’t know where the actual nest was.  The Killdeer actually lay their eggs on bare ground, among pebbles or stones usually.  They don’t make nests as we know it.  No grass, twiggs, etc.

The second of my Bird IQ quizzes can be found at this link:  Bird Quiz.  You can vote any time through next Thursday.  Results will be published on Friday, April 27.  Good Luck.