As I have mentioned in previous posts, we have been following the growth of the Great Blue Herons that are nesting on the Concho River in downtown San Angelo.  We drove by there Sunday morning and I shot this series of one of them testing his wings.  Enjoy and click on any image to see an enlargement.

“Hey, Ralphie, I am going to try and jump over to that other little branch. That will be a good test of my new wings.”
“Well, be careful, Robert, you know how Ma feels when we try shenanigans when she ain’t around.”

“Well, I am going to try it anyway, Ralphie. We just won’t tell Ma.” 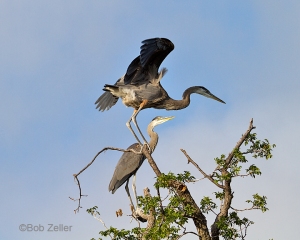 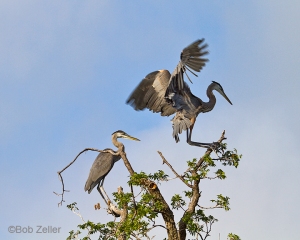 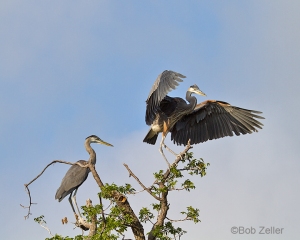 “Whoa! This is really sump’in, Ralphie!” 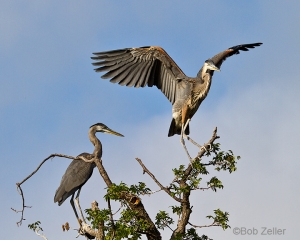 “Hey, Ralphie, I am ready to blow this place. There’s a big world out there.”

When we left a little later, they were still there, but I imagine that they will probably be gone the next time we go check on them again.

In the meantime, I have discovered a nest of Yellow-crowned Night Herons in another residential neighborhood.  More on that later, as I try to get photos of those chicks in coming days.

Good morning to all.  I have here the new quiz for this week.  This one is a bit trickier than the previous quizzes.  In fact, I have decided to give you two views of this week’s mystery bird.  Take note that it was photographed when he was standing under a sprinkler.  So he (or she) is a bit wet.

So, “What Bird is This?”.  Choose a selection from the list below, and we will see how smart or lucky you are this week.