This post will probably contain a bit of entertaining nonsense about my past that I haven’t told you about in detail  But never fear, it is rated PG.  It may not have many pictures, or maybe none at all, but I haven’t gotten that far yet.  We will just see where it leads.

What brought this on, is that my friend Ross McSwain, author of several books about the history of west Texas, made a remark to me that rather surprised.  I have know Ross for forty something years, and after reviewing my book for me, he said “Bob, I have known you for years, played golf with you, listened to you on the saxophone, but I never knew you to be a photographer”.

It made me think about what little my friends actually knew about me.  To set the record straight, although I opted to take a course through the New York Institute of Photography, I had no intentions of pursuing a profession by the use of a camera.  I just wanted to be good at it.  So my photographic work came in streaks.  Mainly when we vacationing, when I wanted pictures of places we visited. 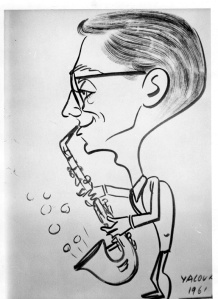 So when we came to San Angelo in 1961, I was with the US Air Force.  My main focus at the time, was my musical career.  Ever since leaving high school that had been my main thing in life.  I rarely had a weekend off from playing the sax.  I was in demand and could name my own price.  But then, at a dance at the Cactus Hotel Ballroom in June of 1962 my life changed. 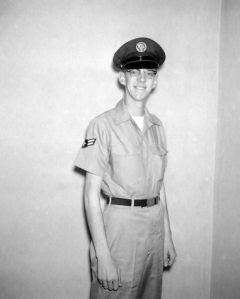 After coming back from intermission, where I had a cigarette (my final one as it turned out), I sat down to play the next set.  Halfway through the first song, my left lung collapsed.   I said to myself  “Oh s**t!, not again!”  I knew immediately what had happened, having had it happen to my right lung in October of the previous year.  I went into denial, and decided to try to complete the set.  I got through three more songs, then I decided to let them cart me off to the emergency room at the air base.  You can see more details about the cause in my Marfan Syndrome Page

In the years following that, I still played in several bands off and on, but was always careful and watchful of my health.  Because of my problems, after spending the summer of 1962 at the Wilford Hall hospital at Lackland AFB in Texas, the government decided to let me go, and I was awarded my 2nd honorable discharge that following September.  (I was on my second tour of duty.)

My intended Air Force career was no more, so I had to adjust and find civilian work.  I tried several things, selling encyclopedias, selling Watkins products, working in a service station.  In 1964 I finally got a job as head bookkeeper for the Lake View School District here in San Angelo.  My Air Force job had been in accounting so the fit was perfect.  But since I wasn’t CPA, the pay wasn’t very good so after a few years I moved on.

In 1968, Ann, who had been working for the local Coca-cola Bottling Company, was transferred to the Las Cruces, New Mexico plant.  I decided to try a new career, selling cars.  Now here is where the fun starts.

At that time I was a terrible introvert.  I was afraid to talk to people.  Not a good asset, if you want to sell cars.  I was working for some very nice people that owned the dealership.  Needless to say, I fell on my face when trying to sell, so they asked me if I wanted work in the bookkeeping department.  I moved to the office and did very well there.

You’re probably still wondering about my photography.  Well, I was still taking photographs on weekends.  The Organ Mountains and White Sands National Monument were near, and it wasn’t a long drive to get to other great sites in the Gila National Forest.  But, photography was still just a passing hobby.

I was asked to join a local chapter of the Optimist Club.  At first, my greatest fear was that they were going to ask me to give the blessings before breakfast.  I kept avoiding that as shy as I was.  But, believe it or not, after several months of hanging with those guys, I lost my shyness, and really started to open up.  My wife said that nobody could shut me up after that.

Meanwhile, back at the Chevrolet Dealership.  I started to get excited about wanting to sell cars.  But based on my previous “sales record”, they didn’t want to take a chance.  So, I decided to bid them farewell.

The next day I went to work at the Ford Dealership.  Within the first hour there I sold my very first car.  A 1972 Maverick to a soldier from White Sands Missle Range.

In June of that year Ann was transferred back to San Angelo.  I got into car sales immediately, and stayed doing that for another six years.  After cars got so high priced, it made me uncomfortable, so I went to work selling tires.  Montgomery Wards until they closed, then Goodyear.  I could sell tires to an Eskimo for his sled. 🙂

In 1982 I got tired of working for other people, so I went into business for myself.  I started Bob’s Mow’n’Trim Lawn and Landscape Service.  It was very, very successful, but it was a strain on my health, so on the doctor’s recommendation I sold the business in about 1987.  I took a few months off, then decided to work as a contractor delivering newspapers.  I was the best in town for twelve years, and when I retired in 1999, they gave me a nice brief case.

So then, I finally had the time to do serious photography.  A fellow artist, a scuptor, suggested I take my work to art shows.  It was a rough start, as I didn’t have much inventory, but after selling a few prints, I really got excited.  I bought a little trailer, backdrops, and display materials.  During the week I would be out in the field taking photographs, then traveling on weekends to shows around west Texas.  We would do about two shows per month.

So even though it took me a few years, the work I did learning the craft of photography finally paid off.  We retired from doing shows about four years ago.  I now sell my work, word of mouth, on-line, and contacts with various magazines, etc.  But we had great memories.  So now you know a little more about me.

Check out my book by clicking on the links on the right side of this page.

42 thoughts on “My Surprising Past (or would you buy a used car from this guy?)”