One place that Ann and I always enjoy visiting is the Water Treatment Ponds at Eldorado, Texas.  About forty miles south of our home in San Angelo, it is consists of five huge ponds, each about 200 feet by 300 feet.  I think one of them is even larger.  Anyway, you never know what you will find when you visit.  We have had times when the birding was scarce.

This time proved to be a bit different.  It was cool, overcast and windy when we left and didn’t really expect to see much, but we felt that it may be worth the trip.  We sometimes tire of the routine birding locally and just like to get away for awhile.

By the time we arrived it had warmed a bit, and the wind had abated somewhat.  The clouds were still overhead, and I really don’t mind that as the light is softer for photography.  Some of the winter duck types have arrived there, such as Gadwalls, Ruddy Ducks, Northern Shovelers.  These we haven’t seen in San Angelo yet, but I guess they are on their way.

There were numerous Savannah Sparrows on the fences, and we saw several overflights of other birds that we couldn’t identify, however there were several Blue-winged Teal arriving.

At one point we were were driving slowly and watching the close shoreline, looking for Wilson’s Snipes.  They are difficult to see and we were not successful in sighting any.  However we saw an American Bittern, a few yards ahead with it’s familiar head stretching upward.  Wanting to get a photograph, I crept a slowly as I could, but it still managed to detect me.  By the time we reached the location where we had seen it, it had nearly disappeared.  Upon close examination, though, I spotted it in the grasses, nearly invisible.  I managed to get several photos of it. 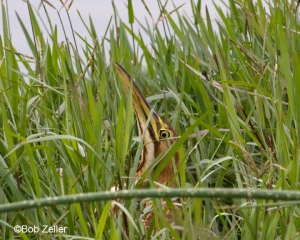 American Bittern – trying to be invisible.

A few yards farther along was one of two Great Egrets that we had seen. 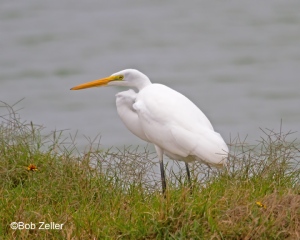 One of the highlights of the day was spotting this Merlin.  I got several images of it and I wasn’t sure of the identification until I got home and could get a closer look at it in the computer.  It is very similar to the Prairie Falcon.  But when it spread it’s tail, I could see the wider, bolder stripes. 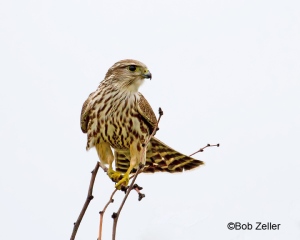 But this gives you an indication of the variety of birds that can be seen there.  We also saw about three Great Blue Herons, a Double-crested Cormorant. an American Kestrel, a few swallows and some other un-identified birds.  In all, according to Ann’s list that she always keeps, we saw twenty-four species in about two hours.  Here is a complete list.