I got this photo of an elusive American Kestrel near the entrance to Spring Creek Park here in San Angelo, Texas.  As I drove up, it was high on a wire off to the right side of my car.  I stopped and contemplated how I would get the shot.  I couldn’t shoot out the passenger side from where I was sitting in the driver’s seat.  I was worried that it would fly off any second.  I decided to take a chance.  I drove slowly forward a couple hundred feet and made a U-turn and came back.  Miraculously, it was still there.  I was shaking as I slowly aimed my Canon EOS 7D with 500mm lens and 1.4 tele-converter out the window, supporting it with my Noodle.  I was able to fire off a half dozen exposures before he flew.  I failed to get the take-off, but I did get this handsome image. 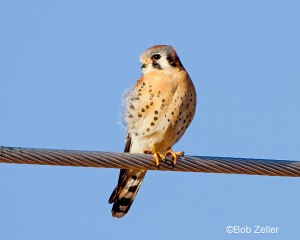 There were many birds around that morning and I also came up with another shot of a Western Meadowlark. 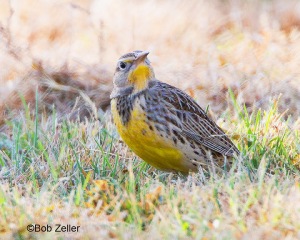 The meadowlark was beneath a tree along with several of it’s friends, and the lighting was tricky.

Both images are cropped heavily.  The kestrel was about 35 feet off the ground and probably a total of about 150 feet away.  The meadowlark was perhaps about 60 feet away on the ground.  Feel free to click on either image to see an enlargement.