Well, Ann and I decided not to dwell on last year anymore, but get back in the saddle and head off into the new year.  Birding -wise, we got off to a great start yesterday.  The temp only reached the mid 40s, but with not much wind it wasn’t all that unpleasant to be out.

We spent a little less than three hours and we saw a total of 37 species.  With a goal of reaching the 200-plus figure for the year, that is always a nice psychological beginning.  I also got a couple of nice images, including one of my best Belted Kingfisher photos to date.  I like it even though the tip of the bill is close to being nipped off.

I followed that up with this image of a Greater Yellowlegs.  I am always amazed with the Canon 7D and the Canon 500mm F4 lens and 1.4 TC set-up.  This bird was across the river about 150 yards away or more, and showed up as just a tiny spot in the viewfinder.  I had figured there was no way that I was going to get a good usuable photo.  The camera, with it’s 18MP, gave me a great file to work with.  I was able to crop it and still have this sharp image. 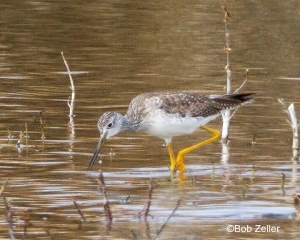 If you are interested in the total species we saw, here is a complete list.  By the way, we only saw 194 species during 2012.  I had thought that surely we could have made the 200 mark.  Maybe this year……  We have a bit more experience now, and hopefully we plan to visit some east Texas areas that are teeming with new birds.