Since we had better weather for a couple of days we have been to our local parks a couple of times.  Today, Saturday, of course, the weather has changed, getting cooler then downright cold for the next six days or so.  Anyway, I managed to get a few photos of some of the smaller birds, plus a pretty nice shot of a Great Blue Heron.  I will show them here starting with three images of a Golden-fronted Woodpecker, which I think is one the most photogenic of that species. 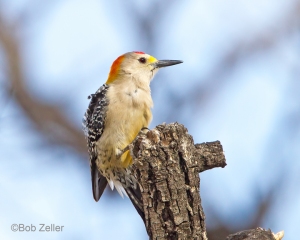 This Savannah Sparrow flew from a tree into the edge of the water.  It is one of my better shots of one of these.  It usually is difficult to get such close-ups of them.

The same goes for the American Goldfinches such as the one pictured below.  I was lucky with this image.  The bird was in dense brush, inside a fence line.  I think I took 30 shots, before I got one that showed nearly the whole bird in focus. 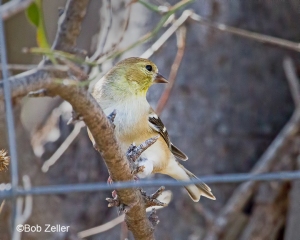 There was still a lot of water standing in the roadways and this Western Meadowlark decided that it wasn’t too cold for a bath.

I have always had difficulty getting decent photos of swans.  Usually the ones around here are on open water, making getting good compositions hard to come by.  Also there is the problem of getting the exposure good because of the whiteness of the feathers.  I believe this image of the two Mute Swans is a bit more interesting with the rocks in the background.

What can I say about the Great Blue Herons.  I always enjoy trying to get interesting images of them.  We ate at the ‘Golden Arches’ for breakfast early Thursday morning.  It was cold, drizzly, and a bit dark.  When we left the restaurant, Ann noticed the heron in the little arroyo adjacent to the parking lot.  Of course, I just happened to have my camera in the car, so I got it out and managed to get several images in the very low light.  I like the photo especially the way the wet weather saturated the colors.

Click on any of these images to see enlargements.

By the way, I still have copies of my highly acclaimed book, “Birds, Beasts and Buttes”, available.  To order autographed copies, contact me at bobzeller1@aol.com.