Going through old images again from the past year or more.  I decided to give some press time to this fierce looking bird.

Actually, the Curve-billed Thrasher isn’t really menacing.  But you wouldn’t believe it by looking into the adult’s eyes.  They are a bright reddish orange, and along with it’s curved bill, it looks downright mean.  Also, it’s call is a meek sounding tweet, not a growl.

I took this image of an adult nearly a year ago as it was hunkered down in some grass. 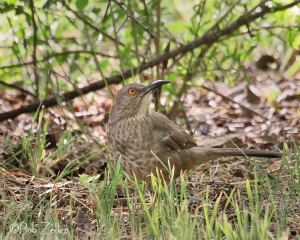 Last September I came across this juvenile, pictured below.  At first I thought that it may have been a Sage Thrasher.  Since it was photographed here in San Angelo, a ‘sage’ would been away from it’s usual area which is farther west.  But after looking at it closely, I found that it was indeed a juvenile Curve-billed.  Notice the paler, or yellow eyes that was one of the deciding marks of a younger bird.

Thanks for visiting my blog again.  Click on any image to see some enlargements.