As I mentioned in a recent blog, I often get calls telling me of new discoveries.  Yesterday I received an e-mail from Suzanne Johnson down in Eldorado, about 45 miles south of San Angelo, informing us that a Long-tailed Duck was making a stop-over.  It is a bird that usually winters on either the Atlantic or Pacific coasts, then spends the rest of the year in the far north.  Ann and I hopped into the car and headed that way this morning, as it is a bird that neither of us had ever seen before.  It took a bit of patience and searching but we saw it at the waste water ponds outside of town.

Again, I got lucky.  We searched for about 30 minutes, and as I was about to give up, I saw a bird splash down in the water.  I zipped my big lens around just in time to get it in focus.  It was my bird, i.e., the Long-tailed Duck.  It was windy, the water a bit choppy as the ponds are large, but I managed to get a couple of images of it.  Not great photos, but good enough to prove the Identification.. 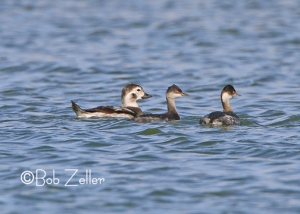 Long-tailed Duck accompanied by a couple of Eared Grebes.

We then came home after seeing about 15 other species in the ponds.  Later this afternoon, I got a call from friends in Eola, about 25 miles west, to come over and shoot photos of their cotton harvest.  Since they were half-way finished and cold weather on the way I though I would get over there and get the job done. 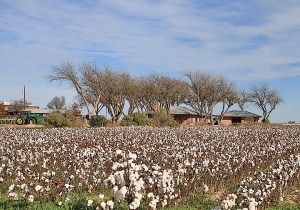 If the above photo was an aerial view, you would see that the home is surrounded by a sea of cotton fields.

Pictured are 19 modules of compressed cotton, freshly harvested.  14 are full, 5 are nearly finished.  Each the size of a school bus.  And they are only half finished.  Looks like a good harvest.  (The modules appear shorter because of the long telephoto lens I was using.)

On the way home from that project, we spotted this Merlin atop a warning sign.  I barely had time to get the camera off of my lap and grab a shot, before it took off.

The Long-tailed Duck is number 262 on my life list if any of you are interested.  Click on any image to see an enlargement.  By the way, the WARNING sign is for buried cable in the area.