As most of you know, Ann and I spent the weekend down at the Casitas of Far Flung Outdoor Center in Study Butte, Texas.  We arrived there Thursday afternoon and found out that Kelly Bryan of Fort Davis, was going to be banding hummingbirds there the following morning.  We had planned on going birding in the Big Bend National Park, but this sounded exciting and made up our minds that we were going to attend the event.

At 8:00 Friday morning, Kelly pulled up with his equipment.  Along with his friend, Carolyn Ohl, from Alpine, they proceeded to put covers on all of the existing hummingbird feeders.  They then took another one to the center of the courtyard area, and set it in a cage with a large opening.  The idea was that all the hummers in the area, upon finding the other feeders useless, would eventually locate the cage with the feeder inside.  It worked handsomely and several birds were caught.

Kelly and Carolyn carefully retrieved each bird and put it in a little cloth sack, which they took over to the bench where Bryan would do the banding.  He then carefully takes the bird from the bag and proceeds to examine it to check the overall condition of the hummer and take measurements.  All such information is recorded in his log book.  After that, he puts a very tiny metallic band on the leg with the date, location, etc.  These bands are very light, with it taking 5,000 of them to weigh an ounce.

On completion of this operation, the hummingbird is then ready for release.  Kelly simply puts it in his palm, (or yours) for a brief few seconds of rest, then the bird flies off.  It is quite a thrill to watch.  In one photo below, an Anna’s Hummingbird is resting on Ann’s palm seconds before taking flight.  Click on all photos to see enlargements. 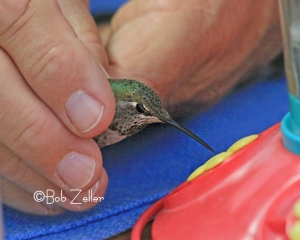 After getting his new band, this Anna’s Hummingbird gets a drink with the help of Kelly before taking flight.

Anna’s Hummingbird rest briefly in the palm of Ann’s hand before taking flight. 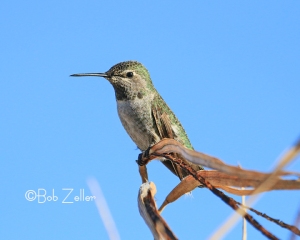 After watching these proceedings, Kelly and Carolyn suggested that we go down to Lajitas and check on the hummingbirds that hang around the restaurant area there.  There we were very fortunate to see three new hummingbirds that we had never seen before.  Not only the Anna’s, which was new to us, but both a Broad-billed and a Blue-throated Hummingbird.  All three of them lifers for me and Ann, bringing our life-list total to 267.  (but who counts?)  Plus we spotted a Black-chinned and a Rufous Hummingbird.  In all, there were five different hummingbird species in that one area.  A real bonanza.

Since we were there just for the weekend, we didn’t do too much birding per se, except for a quick trip to the Cottonwood Campground in Big Bend NP to do check out a few.

27 thoughts on “Banding the Hummingbirds”