Yesterday I posted one of my Red-tailed Hawks to my FaceBook page.  In doing so, I was reminded that it had been a long time since I had blogged about raptors of any kind.  So today, I decided to go back through my archives.  I found a few that I don’t think I have ever posted, some that I hadn’t edited yet, and a few of my favorites.

I will begin with fore-mentioned Red-tailed Hawk.  It was taken a few years ago while on my way to Ballinger, Texas.  He was in the grass on the left side of the highway.  I pulled to the right and stopped and managed to get the photo as he was leaving the ground. 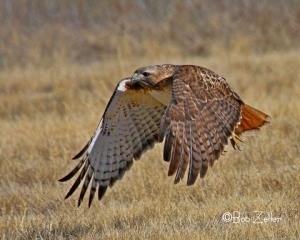 This next photo of the Zone-tailed Hawk, I got just this morning as I was driving through Spring Creek Park near Lake Nasworthy.  I was lucky indeed as sightings of the Zone-tails are very rare around this area of the state.  I do believe I interrupted his meal of a fresh caught ground squirrel.

Next is a Cooper’s Hawk that I captured a few years ago in Big Bend National Park. 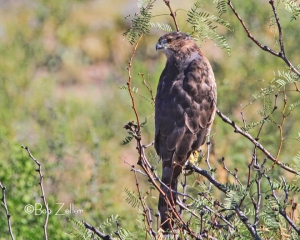 Sharp-shinned and Cooper’s Hawks are difficult to discern between the two species.  I believe the next image is a Sharp-shinned Hawk.  Notice the Cooper’s (above), has a slightly flattish head, where the Sharp-shinned’s head is a bit more rounder.  I may get letters about this, but the sure way to see the difference is you can see the birds next to each other.  The Cooper’s will be the larger.

People don’t think the Greater Roadrunner as a raptor, but he is definitely a voracious carnivore, as this next photo will show.  This image is pictured on the cover of my book, “Birds, Beasts, and Buttes”. 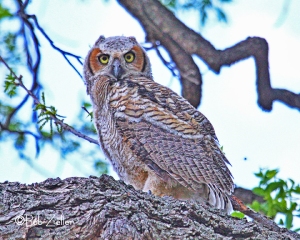 Young Great-horned Owl. A raptor to be.