Since my last post the weather has gotten more seasonable here.  That means I was able to get out more without having to layer on stacks of clothing.  I am still experimenting with my new Canon 7D Mark II, and I am enjoying it more and more.  Here are a few pics from the last few days.

This Golden-fronted Woodpecker was at least 40 yards away.  I am amazed that I was able to get a photograph that was sharp enough to heavily crop the image.  I think the better processor on the Mark II is making for better image quality.

These titmice are one of the more difficult birds to photograph.  They flit in and out of the brush quickly, never perching anywhere for more than a few seconds. 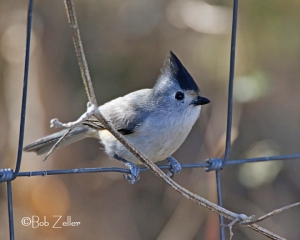 When I first saw the Warbler in the brush, I thought it may be a Nashville or a MacGillivray’s Warbler.  However, after getting home and studied it along with my various guides, I realized that was first year winter Orange-crowned Warbler.  The deciding factor was the split eye-ring, a slight whitish brow, and the streaked breast.

I almost passed up trying to get this photo of a perched Osprey.  He was at least 80 yards away.  In my viewfinder, he wasn’t much bigger than my little focus point.  But since I have been in a trial mode with my new camera I decided to give it a shot.  I steadied the camera and 150-600mm Tamron lens on my driver’s side window.  Obviously the photo is very heavily cropped but the result is excellent. 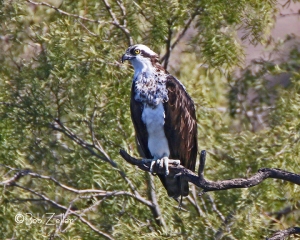 Below is an adult female Eastern Bluebird.  It was back-lit but I was able to make Exposure Value adjustments in the camera.

This Great Blue Heron was across the river.  I was hoping to get a photo of him in flight, but he wasn’t interested in moving from his perch.  I waited about ten minutes, then I drifted on, looking for other photographic opportunities. 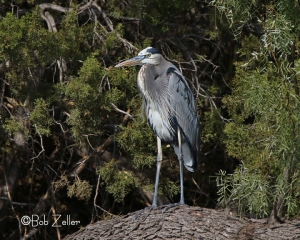 We stopped by the shoreline of the lake to check out the gulls.  All were Ring-billed except for one lone Herring Gull.  It left the building before I could get a decent photo.  I was trying for some in-flight and I captured this Ring-billed as it was flying directly at me.  (BTW, that Herring Gull was number 197 in our quest for 200 birds in our 2014 Big Year.  Three to go.) 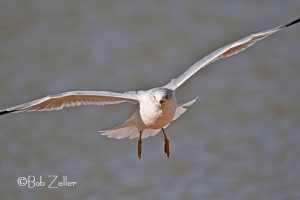 This photo below of the slate colored Dark-eyed Junco presented me with the most challenge.  We had seen it the previous day, but was unable to get any photos.  On our return the next day, we spotted it in some dense brush.  It probably was aware of us, even though we were about 30 yards away.  We waited for it to make a move into the open, while all the time I was trying to get it in focus through the twigs and branches.  It was dark and shadowy in there and the camera bumped the ISO to 6400.  The resulting image is below.  Even with that large ISO the noise is hardly noticeable.  I didn’t use any noise-reducing software as I didn’t want to take a chance on reducing the sharpness.  Again, the photo is, like most of my photos, heavily cropped.

I hope you enjoyed my photos.  Click on any of them to see enlargements.