The weather has been pretty un-settled in Texas as most of you know.  Consequently, my forays into the field to get photographs have been limited the past several days.  However, what I did get, I think you will enjoy.

This first one is of a Franklin’s Gull that I captured at  the now partially full O. C. Fisher Reservoir.  Ann and I had driven out to check on the new water level.  Far in the distance, we saw some birds in the air.  They were so tiny that I couldn’t make out what they were.  I hand-held my Canon 7D MkII and Tamron 150-600mm lens as steady as I could.  I managed to get the auto-focus locked on.  I squeezed he shutter and got this and several other images.  At home in the computer I enlarged the image so I could see what it was.

Franklin’s Gull original photo from the camera, with a 600mm lens.  Before I took this shot, the bird was merely a dot with the naked eye.

I love my camera setup.

From other areas of San Angelo State Park, I got these photos.

This morning we ventured out to Spring Creek Park, the site of severe damage from the storms that we have had.  It appears that there is still some unrest as the birds were not available in abundant numbers.  However, I did manage to the this nice image of a Bullock’s Oriole. 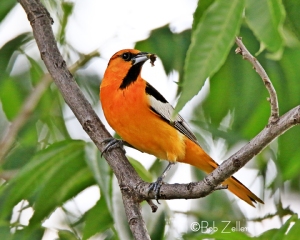