Ann and I woke up early this morning.  The weather look great, so we had this great idea, to get out to Spring Creek Park early enough to get a look at a Gray Catbird the has been seen regularly.  We got to that designated spot about 7:15.  Alas!  Just as we drove near we spotted a grayish bird fly across the water.  We don’t know if that was the catbird or not, but after 30 minutes of waiting and watching, we decided to get back home for breakfast.  We missed him, but we will try again tomorrow morning.  So stay tuned.  But all was not lost.  During the time it took to get there and watch, we observed a Song Sparrow, Osprey, Ringed-bill Gull, Northern Cardinal, Yellow-rumped Warbler, Northern Mockingbird, Wild Turkey, and several White-tailed Deer.

Over the weekend, we got out a couple of times and although the birding was not great, I got some nice looking photos if I do say so myself.  Here’s a re-cap.

On Friday we got out for a little while but not much was stirring.  However, I got lucky and came up with this nice photo of a Dark-eyed Junco.  This is a slate-colored variety.  He was back-lit and in the shade, but with a little finagling in my digital darkroom I was able to correct the lighting. 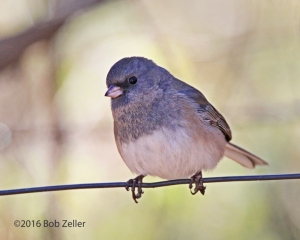 On Sunday, things were a little better but not as good as usual.  However we decided to hit Spring Creek Park and Middle Concho Park.

First up was this Yellow-rumped Warbler. 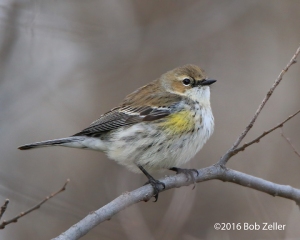 This Great Blue Heron was standing a log and not doing much of anything, but just staring.

Before leaving the lake area we drove by the little beach area at Mary Lee Park.  I tried my luck at photographing gulls in flight.

That was it for the Lake Nasworthy area.  We had plenty of time, so off to the San Angelo State Park we went.  We drove around through the area where they had burned off the unwanted Mesquite trees and brush.  Not much stirring, I imagine because of the loss of so much habitat.

We headed in the direction of the Burkett multi-use area.  Along the way it finally got real exciting.  Off to the right of the road was an American Kestrel clinging to the top of stem from a bush.  I was hesitant because these birds are known to not hang around very long.

But since he appeared to be just enjoying himself, I decided to take a chance.  I turned right and drove into this rough area, carefully avoiding driving over any prickly pear.  I swung around enough so I could photograph from my driver’s side window.  One thing I have learned, folks, is to never get out of the car.  The birds will fly for sure.

So, I was in position, about thirty yards away.  Believe it or not, he continued to sit and sway in the wind, at times staring at me.  I managed to get off about forty shots of varying poses.  Here are two of them.

After those forty shots, I was getting brave and decided to do what I tell people not to do.  I got out of the car. Hey, I wanted creep closer.  Instantly, the kestrel took flight.  Of course, I knew it would.  Will I ever learn??

But that ended our day on an exciting note.  It was definitely the highlight of the day.

I hope you enjoyed the story and the photos.  Click on any of them to see nice enlargements.

Footnote:  I always try to live by the rule that you should never disturb the wildlife.  I violated that principal by trying to get out of the car.  I didn’t need to get closer.  I had all of the shots I wanted.  My long lens gets me as close I need to be.  I should have stayed in the car and drove away.  So, in recflection, I am sorry for my actions.

8 thoughts on “An exciting weekend……”