In search of that elusive Gray Catbird, Ann and I have been getting up with the chickens, about 6:30 in the morning.  We get dressed then head to the Jack and Jill Donut Shop for some coffee and a burrito to go.  We then headed to the area near Spring Creek Park where the catbird had been spending several days.  We had seen it once previously, but I was on a quest to get a photograph.  Anyway, Friday morning we followed the same routine.  But again, the Gray Catbird failed to make an appearance.  In case you were wondering about the excitement, the catbird is very rare to this area.  It’s normal range is much more to the east.

We decided to sit and wait and see what else might shot up.  We weren’t disappointed.  This Orange-crowned Warbler made a stop in the reeds.

The light was really low this early in the morning so I boosted the ISO to 5000.  My Canon 7d Mark II handled it very nicely with minimal noise.  I also got these two Lincoln’s Sparrow images.

A Yellow-rumped Warbler perched in a nearby tree.

A Northern Mockingbird checked out his territory from a log near the water.

We probably spent nearly two hours at this location, but when we decided that the catbird had left the building, we moved on.

We hit the brushy areas in the park.  At one point, we saw another birder friend, Randy Hesford, waving us to stop.  We drove near to him where he was peering into the brush.  We got out of the car and carefully walked over to see what he was looking at.  There it was.  A Gray Catbird!  It was moving all over in the tangled bushes.  After several attempts, I finally was able to get it in focus.

Not the greatest photo, but I had to work with what was in front of me.  At least, I finally got my picture.

We continued to stroll along the brush line and caught a few other small birds.  This Ruby-crowned Kinglet seemed to have an attitude.  I was surprised that his red crown wasn’t showing. 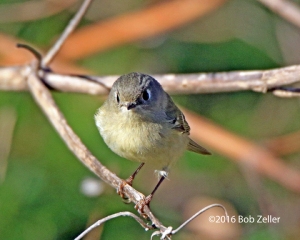 Another Yellow-rumped Warbler posed for me.

We also so a variety of other small birds while there, but failing to get anymore usuable images.  Some birds that we saw were a Verdin, Hermit Thrush, Northern Flicker, Eastern Phoebe to name a few.

After that foray, we headed to Middle Concho Park and I will save the pictures from there for my next post.