Spring sprung a few days ago.    There are reports of some of the arriving summer birds, but I haven’t seen very many of them yet.  But soon, we will be having orioles, buntings, and other colorful birds to watch for.  In the meantime, here are a few photos that I managed to get during the past few days.

We drove to San Angelo State Park as we had heard of some Scissor-tailed Flycatchers that had arrived there.  We missed them, but I got some nice sparrow photos.  (Click on any photo to see some nice enlargements.)

This Song Sparrow was having a difficult time in the wind.

This Vesper Sparrow was having an easier time….. 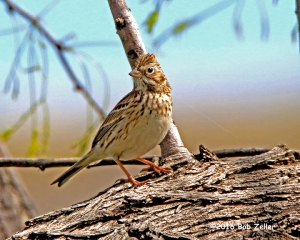 …..and this Black-throated was taking it pretty calmly. 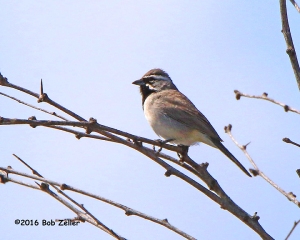 Wandering down in the grass, this Greater Roadrunner was having a great time doing a bit of hunting. 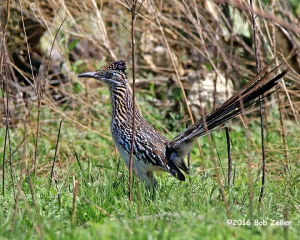 Back out at Spring Creek Park, we had to check on our owls.  There was nothing we could see on the nest, as it is pretty high up in a tree, but the parents to be were taking a break in a nearby tree.

While we were there in the park, we decided to check out the brushy areas, where we can usually find some of the tiny birds.  We saw several kinglets, but the only photos I came up with was of this Blue-gray Gnatcatcher.

After getting those photos we cruised along the water and was treated with this Great Blue Heron, about 200 yards away across the water.

That’s about it for this post.  We’ll get out and about again in the next few days, after completing some yard chores.

Until then, Happy Birding!!

I don’t remember the last time I have mentioned this, but I would like you to know that ALL of my photos that you see on any of my posts are for sale.    Also I still have copies of my book, “Birds, Beasts and Buttes”, and my DVD of 100 of my best photos.  Just e-mail me at bobzeller@pobox.com. for more info.