Near the Twin Buttes Reservoir, there is a low depression where water stands after we have had some rains.  Mudders, defined as immature adults that love to play in the mud with their pickup trucks, are always driving their vehicles through it and keeping it pretty well churned up.  The water will usually take three or four days to either soak in or evaporate.  The area is surrounded by five large mesquite trees.  The combination of the trees and convenient water makes it a very nice little birding oasis.   All one has to do is to park close by and watch.  That is, providing you do it on a week day, when the mudders are absent.

So, that is what Ann and I did the past two days.  First we stopped by early in the morning at a local Jack and Jill’s for take-out coffee, a roll and a burrito.  We took them with us to this mud hole, parked and set in for a few hours of birding and photography.  We spent two to three hours each morning.  We saw a total of 28 individual species for the two outings.  I will give you that list at the bottom of this post.  Here is a sampling of the birds that we saw.  Click on any image to see enlargements.

The Yellow Warbler is one of favorite of the warbler species.  It is always a joy to see this one in the trees. 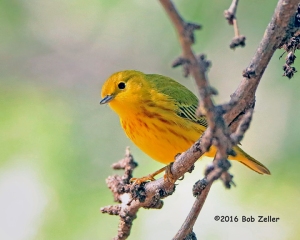 I missed a shot of a beautiful mature male Blue Grosbeak.  But this young one perched on a branch nearby.  Just as I got him in the view-finder and focused he decided to fly.  I punched the shutter just in time to catch him as he took off.

Another favorite summer bird is the Painted Bunting.  This is the first one that we saw this year as they are just starting to arrive.  Thae harsh early morning sunlight did me know favors but I got this acceptable image.

The Orchard Orioles are also new arrivals. The adult male stayed deep in the trees and I didn’t get an acceptable shot of him, but this first year male gave me an opportunity. 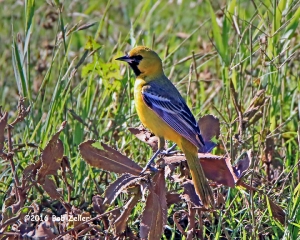 I always admire the Canyon Towhees.  They are rather quiet and somewhat bland in color, but I still think they have a cerain beauty about them. 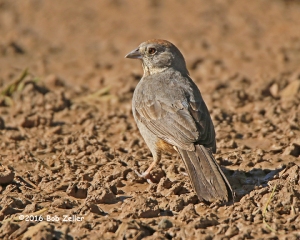 There were plenty of Lark Buntings around.  This is a female.  I had posted a photo of a beautiful male in my previous post.

I believe this one was named by a Mr. Richard Cissell.  Kidding!!  This weirdly named Dickcissell is another difficult bird to find.  I love the coloring.

Ann spotted this flash of yellow in the trees.  I was trying to spot it, too, and it finally lit on this branch only about ten feet away.  Only then, did I realize what it was.  I couldn’t believe my eyes.  A Yellow-breasted Chat, although not rare, is usually pretty shy and most of the time, very difficult to find.  This is only the second time I have ever seen one and had the opportunity to photograph it.

This Cactus Wren was still around, working on it’s nest.

Here is the complete list of the birds we observed during those two days:

18 thoughts on “Birding at the Mud Hole”