Okay, so I didn’t photograph these Red-tailed Hawks in the sunset, but I thought it made a catchy title to this post.  Actually, I got them over the past few days of the Labor Day Weekend.  Birding has been a bit slow, but as Ann and I were driving through Middle Concho Park, we spotted a juvenile Red-tailed Hawk on the ground, and upon further examination of the photo, it seemed to be contemplating snatching up a worm.  Whether it did snatch it or not I do not know.

Juvenile Red-tailed Hawk checking out a worm on the ground.

We heard or saw movement above us, and discovered a mature adult Red-tailed Hawk sitting on a tree branch.  It appeared to be unaware of us, so I was able to get this photo. 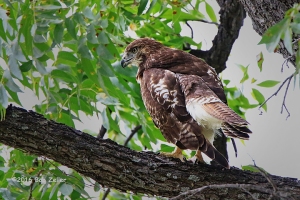 We thought that was a neat encounter as we seldom see two of these hawks at the same time.  Our luck stayed with us, as a couple of days later we were near the same location and we spotted the juvenile high up perched on a dead tree.  This time I got several images of him and I picked these two to show you. 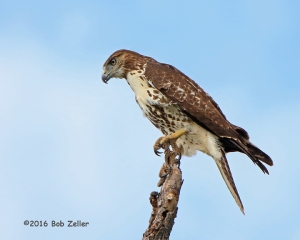 Juvenile Red-tailed Hawk on the move.

The adult was nowhere to be seen this day, but we did hear him scream a time or two, so he was somewhere nearby.  However, there were a number of Scissor-tailed Flycatchers around. 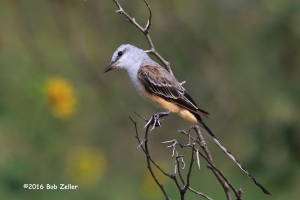 And a few other assorted species…… 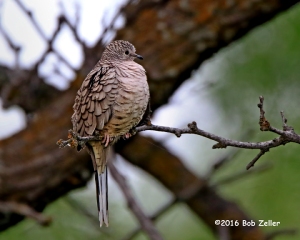 I am happy to share all of these images with you.  It is the reason that I go out day after day, so I can get new images to post here.  I hope that you understand that, because my copyright is shown boldly at the bottom of each image, that these photos can’t be copied without my permission.  It would be my hope, that if anyone was interested, they would purchase a print from me for a nominal fee.  A friend wanted to print directly from my blog instead of buying.  Hey, with friends like that who needs an enema. 🙂

By the way, the photos you see here are at a very low resolution.  If you were able to use them to print, they wouldn’t be very usable.  I have spent many thousands of dollars on education and equipment in my profession.  The only way I recoup any of that is by selling prints.  On that note, I have my 2017 calendars now.  They are really exquisite, high quality, and beautifully printed.  The selling price is 18.79 plus 1.21 Texas sales tax.  Free delivery in San Angelo, Texas.  Out of town mailing add 6.00.