This post is a little bit off of my usual style, but it will serve as an example of how things can work out, even if a little unorthodox.  But, most importantly, how having faith in the Man upstairs, can make things work out.  We will have our 60th anniversary in a couple of days on August 18.  (In the photo above, note all of the hundreds of tiny bird photos, from my DVD.)

Here is the true story.

I am from Muskegon, Michigan originally.  In March of 1958 I was stationed at Ardmore AFB, Oklahome.  Ann had just moved to Muskegon from her home in Beulah, Michigan.  She did this to attend Muskegon Business School.  She was nineteen year of age.  She just happened to rent an upstairs room and my grandmother’s house.  (You can see where this going, can’t you.)

Yep, my sweet grandmother, decided that she should do the right thing and notify me of the cute girl upstairs.   She provided me of her address, just in case I was interested.  This was in mid March of 1958.  Well, since I was a lonely service man, of course, I was a little interested.  (heck, a lot interested).  I decided to write this lass, and introduce myself as the grandchild of her landlord.  She wrote back immediately with a very nice letter, telling me about herself, etc.  So I wrote her back again.  That started our back and fourth letter swapping.  We struck a neat friendship that blossomed as we got to know each other.  She sent me a couple of pictures of herself.  I thought she had great legs. You have to agree, she has great looking legs.  So, anyway, I sent her a couple of mine, as I wanted her to know what she was getting into.  Here I am, dressed to impress.

We continued to write each other.  By mid-April we were writing each other every day. Before, I had been writing to about 50 other girls.  (Well that figure may be inaccurate.  Maybe it wasn’t that many  I will need to go back and check my records.  After all, I am nearly 84 years of age, and my memory is a bit fuzzy.)  Anyway, I remember sending both of them a Dear Joan letter.  Things were getting more serious, but I still hadn’t met or even talked to Ann.

In about mid-June, I decided to ask Ann if she would marry me.  Yep, that’s right.  Sight unseen, I knew she was the one for me.  I waited in anticipation for her answer.  Six days later I got the return letter.  She said “I’d be honored to be your wife”.  Wow! I thought, what do I do now?  Well, I got my calendar out and did some calculating.  First,we needed to set a date.

I decided a fast trip home was in order.  I could only get a three-day pass, but that didn’t stop me.  I decided to hitch-hike to Oklahoma City, go to Tinker AFB and get a hop (free-right) on any military aircraft that was heading to Michigan or vicinity.  I figured I would hitch-hike to Muskegon, see my future bride for a few hours, then grab a bus back to Ardmore.  I called my dad and asked him go to Ann’s apartment and inform her of my plans.

Well, you know what they say about the best-laid plans.  I made it to Tinker AFB just fine.  But as I was sitting, waiting in the transient lounge a fierce thunder storm hit.  It included rain, very high winds, and large hail.  All flight operations ceased and all aircraft were grounded.  I had no choice but to hitch-hike back to Ardmore when weather cleared.  When I got there I called my dad again and asked him to go to Ann’s place again and tell her of my aborted mission.

Okay, I decided.  Time to go to plan B.  I decided to call her and talk to her on the phone.  This would be the first time I would hear her voice.  I called my dad once again.  (By now, my dad is getting to know Ann quite well.)  My grandmother didn’t have a telephone, so I asked my dad to, once again, go get Ann and bring her back to the house.  I would then call home at a designated time, and Ann and I would have our first conversation…….to make wedding plans.

Well, to have a private conversation at my parents house is not easy.  My dad has his favorite chair, a huge recliner that is where he spends his time relaxing.  Our phone is, yep, you guessed it.  On a stand, right next to that chair.  There are no other handsets.  I do not know if my dad gave up his seat for her, but I didn’t ask, as I had other things on my mind when she said hello to me…..for the first time.  We chatted a little then I asked her how August 18 would work for her.  I mentioned that date because of my plans that I had strategically worked out, explained in the following paragraph….

I had made some preliminary  plans vis-a-vis our wedding date.  I knew how many paydays I would need to have to get enough money to rent an apartment, buy groceries, and get a round-trip ticket for me.  All the little things need to start a sucessful marriage to get off the ground.  So I had calculated all of this and figured if I could leave on Friday the 15th, after getting paid of course, I could get to Chicago on Saturday.  A friend of mine was heading that way and he would give me a ride there to the Chicago bus station, where I could buy a ticket for the final leg to Muskegon, Michigan.  Ann was to meet me at the bus station, at 2:00 PM the following day, Saturday.  Then we could get married on Monday the 18th.

So, back to our very first telephone conversation.  She said that date would be fantastic.  She would graduate from business school the previous week, so our timing was impeccable.  She said she would make all of the plans, get the license, line up a church and preacher, and send out invitations.  Before I forget, I also went to a jewelry in Ardmore store and paid 79.00 for a set of diamond rings.  Yes, they were real.  Remember this is 1958.

It worked out exactly as planned.  I pulled into the bus station at 2:00 and she was sitting on bench looking pretty much as she did in that picture above. It was like we had known each other forever.  We got a taxi to head for my parents house.  Remember, back then co-habitation (shacking-up) before marriage usually wasn’t done, so I would be staying there until we were married.  She mentioned on the way to the house, that I wouldn’t have much time to relax, as the wedding rehearsal was at 4:00.  She was in a hurry.

All went well, we got to know each other more as the weekend went by.  The wedding on Monday evening was very nice, except for the absence of her parents.  They were up in age and didn’t feel up to making the 150 mile trip from Beulah to Muskegon.  On the following day, Tuesday, we did drive up there, though, so I could meet my in-laws.  They turned out to be awesome people.  There was only one minor snag.  I didn’t have enough money for Ann’s bus ticket back to Ardmore.  I had hoped to get some cash in our wedding gifts.  Alas, there was none. 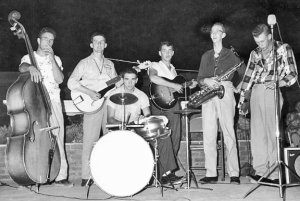 The Melody Rangers – Ardmore AFB – Me 2nd from the right.  On far right is future steel guitar grat, Stu Basore.

But no fear.  Since I was a professional musician before and during my Air Force career, I had an extra alto saxophone that my parents were keeping for me.  I took it to the local music store, that I used to haunt as a teenager.  I talked the owner into buying that sax so I could buy Ann’s bus ticket.  Problem solved.  We packed all of Ann’s belongings, including dishes, pots and pans, etc. into seven suit cases.  We checked them through on the bus.

Back in Ardmore.  The following day I took Ann out to the airbase.  She got a civil service job working in base supply.  Our landlord, thought we were a sweet couple.  Their son had a cream-puff 1953 Buick Roadmaster that he was willing to sell us for 795.00 and he would tote the note.  I would make payments to him.  The Lord was smiling on us.

So there we were.  All of a sudden we went from, ah, let’s see.  I won’t say a struggling couple, as we didn’t have enough sense to know what struggling meant.  We were just taking each day one at a time, having the time of our lives.  But there we were, Ann had a great job, we had a great car, and I was about to get promoted and add another stripe.  You see, the Good Lord was following our antics all the way, making sure we wouldn’t get lost.  It has now been nearly 60 years.  I wouldn’t recommend our way of getting ‘hitched’ but if I had it to do over, I wouldn’t change a thing.

I hope you enjoyed this fun, but true story of love and adventure.