Birds continue to be a little sparse around here, but Ann and I have to keep them honest so we continue go on our little jaunts through our favorites sites.  Not only is it still great fun, but healthy as well.  But my rehab exercises are starting to pay dividends.  They have helped me feel better.  In fact, I saw my doctor a few of days ago for a checkup.  He said, “Bob, you are in”awesome” shape.”  Of course, except for terminal pulmonary fibrosis, incurable Marfans Syndrome, polymysemia which is under conttrol, and osteoporosis for which I think there is an app.  In other words, I am in pretty danged good shape considering the shape I am in. 🙂

But I digress.  Saturday, when we ventured out to Spring Creek Park, we weren’t seeing much, but Ann exclaimed “Stop!”  When she says that I stomp the brake.  She pointed out the a large live oak tree on the left.  She said “There’s an owl!”  At first, I didn’t see it, but after looking to where she was pointing, I did in fact spot it.  It was in the open but the harsh morning sun was casting glaring highlights and deep shadows.  I took several exposures, which although I didn’t know it at the time, they ended up being tossed in the digital waste basket.

We continued on and ran into a couple of new birders, Natalie Bryan and Kristina Phluger.  We told them about the owl.  They were pretty excited as they had never seen one in the wild.  We invited them to follow us, and we drove back to where we had originally spotted it.  Alas! It wasn’t there.  But, Ann with here sharp eye, saw that it had moved to another place.  As we watched, it flew about 200 yards to another resting place.  We could see where it went, so we drove a bit closer, where we had an open shot with our long lenses.  I took several more photos, trying to get a shot that avoided the leaf that was over the owl’s face.  I had to settle for this one.  Not too bad.  I hope you like it. 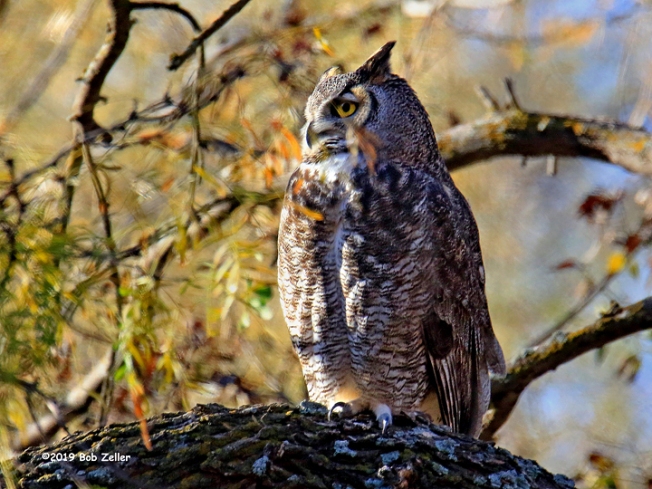 After that, we decided to check out Twin Buttes Reservoir.  Pretty much the same results.  No birds to speak of, except for this Red-tailed Hawk atop a utility pole.  You know that I have a weakness for photographing them.

’til then, HAPPY BIRDING