I am feeling better now that I can get out into my nature environs again.  Traveling through the San Angelo State Park, I came upon this beautiful Scissor-tailed Flycatcher.  I pulled the car off the road.  The bird continued to pose for me, and I think I came away with one of my best photos of one in a long time.  I hope you enjoy. (click on it and the other images to see enlargements.) 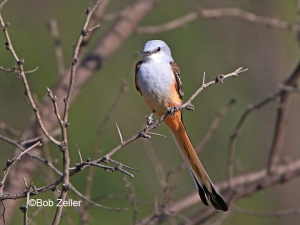 We also ventured to the north section of the park.  This Great Blue Heron was standing in a pond in the North Concho River. 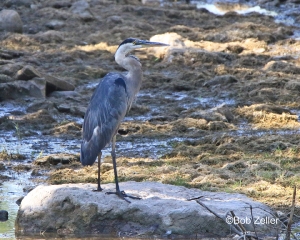 Before we left that area, I had to take a shot of this Black-tailed Prairie Dog.

The following morning we made a short visit to Spring Creek Park and spotted some Eastern Phoebes cavorting in some brush.  One of them stopped long enough to take a breather on a wire fence. 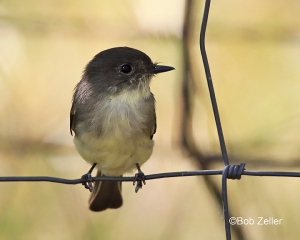 Migration isn’t in full swing here yet because of our lingering 100° days.  But cooler weather so projected for the next few days so birding should start improving.

I would be remiss if I didn’t remind you of my new DVD that I recently produced with the help of DST Productions in Knoxville, Tennessee.  One hundred of my finest work, including birds, wildlife, and landscapes.  Truly a beautiful collection set to some beautiful music.  In 1080P HiDef.  As many of you know, I am a very trusting individual.  You can have this DVD if you will mail me a check for 25.00 that includes any taxes and shipping expenses.  My address is Bob Zeller, 4401 White Ash Ln., San Angelo, TX.  I will ship it immediately by Priority Mail.  By the way, it would make great Christmas gifts.  I have references available if you like.

Happy Birding to all. 🙂

Still pretty warm (hot) here and we are not getting out much.  The birds are laying pretty low, so I am getting caught up, going through old images, and resurrecting some.  Here is one that I came across that I captured in February and never before published to this blog.  Probably one of my favorites of a Northern Bobwhite.

Another February photo of a Black-crested Titmouse.

From April, an Osprey.

Recently, driving in the heat through Mary Lee Park here in San Angelo, I discovered that the Prairie Dogs are expanding there range away from the nature center there.  This little guy was eyeing me carefully as I drove by.

My new “World of Bob Zeller – Outdoor Photographer” DVDs are here. Outstanding collection with great sound track. 100 of my best images. Better than my book. Produced by DSTappan Productions of Knoxville, Tennessee. Price is 25.00 that includes Texas tax and shipping. Local San Angelo residents only 20.00 if I can deliver it to you. I do business the old-fashioned way, just a handshake. You mail me a check to: Bob Zeller, 4401 White Ash Ln., San Angelo, TX 76904-4528, and I will get one shipped to you. Also, my phone is 325-944-1839 and my e-mail is bobzeller@pobox.com.  I have many references as to my honesty if you are interested.

That’s all for now.  Happy Birding!!

Ann and I got back from Roswell, New Mexico late yesterday, Thursday, afternoon.  It was a fun three days.  Our purpose was to bird and photograph Bitter Lake National Wildlife Refuge.  I will have more on that in a day or two, but I wanted to share with you one of the highlights, and it took place in downtown Roswell, NM.

We had visited Bitter Lake NWR on Tuesday, but on Wednesday morning, Michael Richardson, one of the owners of the Enchanted Farm Bed & Breakfast, where we were staying,  took us on a little tour around the area.  Driving through one area of the city, we passed a little prairie dog village.  There were many Black-tailed Prairie Dogs scurrying around, but what caught my attention were several Burrowing Owls (Athene cunicularia), standing on some of the mounds, enjoying the early morning sun.  I had never seen one of these owls up close nor had any photographs, so I was excited to have this photo op.

I made an illegal U-turn and parked across the street.  I got my Canon EOS 7D with the 500mm lens and 1.4 tele-converter out of the car, and crossed back over to the fence that was bordering the area.  I proceeded to get several images of one of them, by propping my camera on a fence post.

Later on, as Michael was taking us towards another park, we spotted this owl on an overhead wire.  Wow!  Talk about getting some great shots, here was this one just posing for me.

These little owls are only about 9 inches tall, and they are real cuties.  Click on any of the images to see an enlargement.  I am making this post short, as I have many things to do to get caught up.  I will do a post about Bitter Lake NWR in a few days and have more info for you about that place.

Yesterday morning, Friday, Ann and I woke to a nice clear, sunshiny day.  The temp was still only about 20 degrees.  We waited a bit until it was up to about 28 then we headed to San Angelo State Park.  First we needed to put seed in the feeders.  We do that on a regular basis, not just to feed the birds, but for the main purpose of attracting birds for the numerous birders that frequent the popular bird blind.

Cactus Wren in the snow

I also wanted to take advantage of the snow still on the ground, to get some wintery photographs.  My vision was to catch a Northern Cardinal perched on a snow-covered branch.  But a vision was all it was, as there wasn’t any snow on the tree branches.  All we had was about an inch of it on the ground.  But I did get a couple of nice photos of some birds in the snow.  One was the Cactus Wren.  The other was a White-crowned Sparrow that seemed to be staring at some large cat tracks.  Perhaps a Bobcat?? 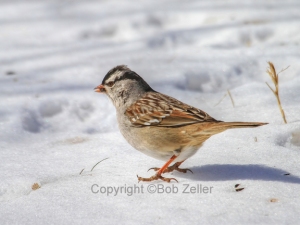 At the blind, I scared off a small Opossum as I approched.  The water trough, which is about 2 feet deep was frozen solid.  I tried to break through it, but to no avail.  I would have to wait and let the warming sun do it’s job.  O. C. Fisher lake, which is dwindling by the day, looked like it was frozen all the way across.  Leaving there, we stopped by the Prairie Dog village.  A few of them were sitting on the mounds, pondering if they should venture across the snow.

But, today the snow will probably leave for the most part.  The sun is shining brightly and the temperature is climbing again.  Will spring be just around the corner??  Enjoy the photos, and click on any of them to see enlargements.

I have been focusing, pun intended, on my photography of birds a lot lately.  As a wildlife photographer I also seek after images of the four-footed kind.  One of my favorites is the the Black-tailed Prairie Dog.  There is a “village” of them at the south part of San Angelo State Park, and another at the north section.  I took the photos with this article at the southern area.  The following info is courteous of Wikipedia, the free encyclopedia. 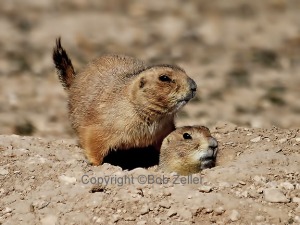 Black-tailed prairie dogs are generally tan in color, with a lighter colored belly. Their tail has a black tip on it, which is where their name is derived from. Adults can weigh from 1.5 to 3 lb (0.68 to 1.4 kg), males are typically heavier than females. Body length is normally from 14 to 17 in (36 to 43 cm), with a 3 to 4 in (7.6 to 10 cm) tail. They have small ears, but keen hearing, and small, dark eyes, with good vision.[citation needed] 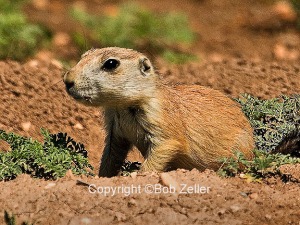 I hope you have enjoyed reading about the cute and comedic animals that exist at the park.  They are fun to watch and enjoy.