Here’s the deal.  This is not a contest.  However, I have a photo of what I think is a Cooper’s Hawk.  Karen (her blog), sent me a photo of what appears to me to possibly be another Cooper’s.  However, I am not certain, so I am posting both photos here.  Now I know there are a lot of birders out there.  I would like to hear from any/or all of you to read your opinions and comments.  My photo on top.  Karen’s on bottom. 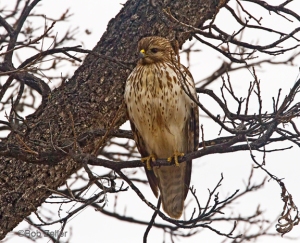 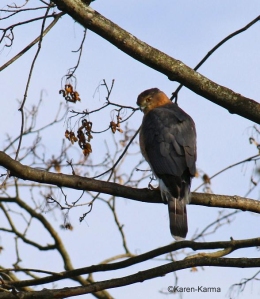 There you have it.  Based on what you see in these photos, what do you think they are.  My personal opinion is that they are either Cooper’s Hawks, or Sharp-shinned Hawks.  BTW, the bottom photo was taken in the eastern United States.  The top one, of course, photographed here in San Angelo, Texas.  Click on either of them to enlarge.  So don’t be bashful, you won’t hurt anybody’s feelings.  Just give us your opinion.

Well, heck, so it ain’t on my shoulder, but I think I heard that line in a song sometime ago.  Besides, I wanted to have a catchy title to get your attention.  This Eastern Bluebird (Sialia sialis) was actually sitting on tree branch about 40 feet away from the car.  It was taken two days ago during our little trip to Spring Creek Park.

This is one of the few photos that I got that day that I was really able to get in exact focus with that 500mm and 2X tele-converter.  If you remember, I told you that I had to use manual focus.  Now, remember, at my age, I am certainly not new to manual focus.  In my earlier days of photography, I don’t think auto-focus was invented yet.  But nevertheless, when you are dealing with long lenses, in the 1,000mm range, manual focus is very delicate.

In this case, the bird wasn’t too far off and was well lit, except for the shadow over it’s face.  If only it would have moved about six inches to it’s left, it would have been perfect.  But birds have a will of their own, so I was stuck with the pose.  For a stable support, I put my Puffin’ Pad on the window sill, turned off the car engine, and took my time turning the focusing ring.  Fortunately, the bluebird was comfortable, and in no hurry to fly off.  He also was in no hurry to move those six inches.  I took about 12 images, with that shadow in various positions across it’s face.  This photograph was the one that minimizes it the best. 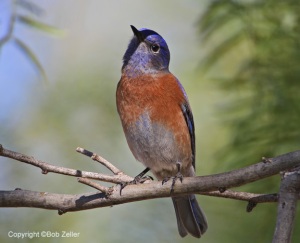 Yesterday, Wednesday, Ann and I decided to make a return trip to Spring Creek and Middle Concho parks.  The weather was nice, turned out to have a high of 71.  We called Jodie Wolslager, our birding and photographic friend and asked her to join us.  She just recently received her Canon 500mm f4 lens and was anxious to get some inaugaurative photos.  And guess what, with her first shot with it, she nailed a shot of a Great Blue Heron in flight.

It was a real fun day.  The birds were active.  Lots of surprises.  But the biggest surprise was as we were making a cruise through Spring Creek park, a Porcupine mozied out of the woods.  It was the first time I ever saw a porcupine live (not roadkill), in the open and walking around.  Jodie and I both got out of the car and keeping far out of the way so not to panic it, we followed until it returned to a tree at the edge of the woods.  It promptly climbed it, found a fork about 10 feet above the ground, then got comfortable.  Here are a couple of my images. 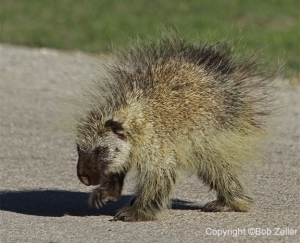 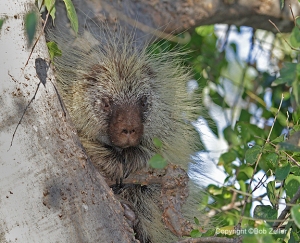 Later, I was also able to get these images of a juvenile Belted Kingfisher.  It was pretty far away, so I used my 2X tele-converter on my 500mm lens, hand-held.  I am not completely happy using that set-up because of the manual focus.  I was able to save the photos with editing, but I may be better off just using the 1.4 tele-converter, where I have auto-focus, and then just cropping closer.  It’s fun to experiment with different methods, though. 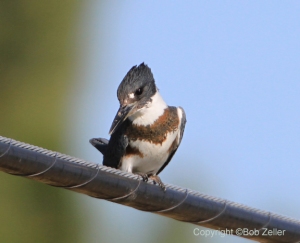 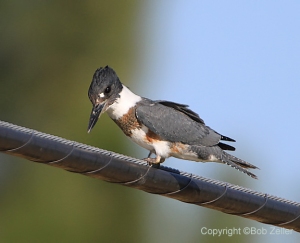 For the birders out there who might be interested, our total count for about three hours was 28.  A lot of that time was spent doing photography, though.

But a fun day was had by all, and that’s good, because it looks like the weather is not going to be very favorable for the next week or so.  One more thing has happened since I started writing this post this morning.  Ann happened to look outside, and she saw what we decided was a Cooper’s Hawk, grab a White-winged Dove and fly into the trees with it.  I ran out, but all I saw as the hawk flew off, was a shower of feathers.

Click on any of the images for enlargements.  Talk at ya agin’ soon. 🙂

Since I ended up getting a nice photo of an Eared Grebe (Podiceps nigricollis) Sunday morning, I thought I would show it to you along with another type, the Pied-Billed Grebe (Podilymbus podiceps).  An interesting thing about grebes is that they spend most of their time on the water.  Because of lobes on their feet that help them to be better swimmers, they are rather ungainly trying to walk on land.  They use floating nests among reeds and other growth.  When preening, they eat their own feathers and feed them to their young. 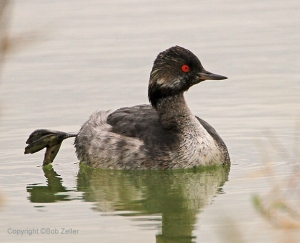 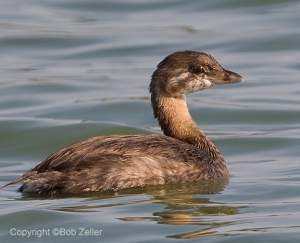 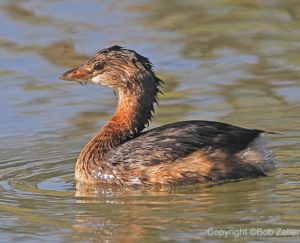 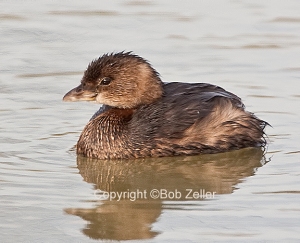 Adult pied-bills can be identified by the dark band around the bill.  Winter adults and juveniles do not have that band.  Grebes are rarely seen in flight.

I hope you enjoy these photographs, and also those that you can see by clicking on the Flickr Logo on the right side of this page.

Several months ago Ann and I came upon a Killdeer (Charadrius vociferus) nest with three eggs in it.  Actually, it really isn’t a nest as we know it.  They prefer to nest in gravelly locations.  When they are ready to lay eggs, they just scrape aside the pebbles and drop the eggs on the spot.  Then, during their nesting time, they perform their elaborate “broken wing” distraction, when the nest is approached too closely. 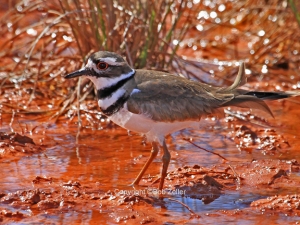 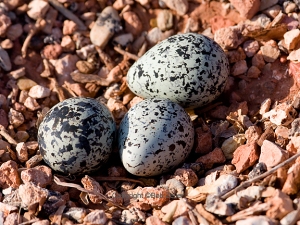 These ‘nests’ are difficult to see, as they usually blend in with the surrounding area.  It is possible to step on one before you see it.  So you must be alert. 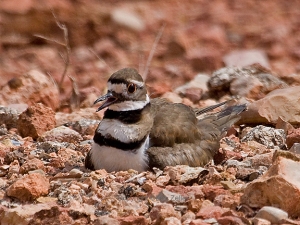 We continued to monitor the situation during later visits to San Angelo State Park, where the nest was located.  Finally, we arrived a few days after the chicks hatched.  As you can see, young killdeer have are mostly big eyes and long legs.   Also as you can see in the photo below, they, like most children, enjoy wading in the muddy water. 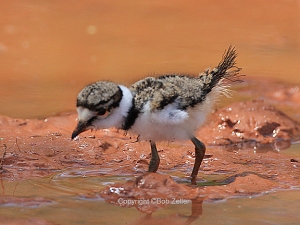 I hope that you enjoyed these photos and my little description of the nesting Killdeer.   Click on any image to see an enlargement.

First, I want to say thanks to the many of new subscribers that I have gotten recently.  I guess a lot of people are interested in what I have to say and like my photographs.  I have been writing this blog for over two years now.  A dear friend and my wife, both got me into this.  To date, I have had over 38,000 hits and I have readers in 116 countries and counting.

One of my latest readers and a subscriber, is also another bird photographer.  He is John English, (website).     He is also listed at the right under my Favorite Websites.  Check him out.  If you like my bird images, you will certainly like his.   John, who lives in Abilene, Texas, have a lot in common, except he has a (sob) bigger lens.  🙂

Today, I decided to show you some old images of  the Western Scrub Jay.  They are not too recent, but I realized that I had never mentioned them in my blog.  For some reason or other, they are not in San Angelo, at least, not in any great numbers.  I photographed these at the X-Bar Ranch, southwest of Eldorado, and at the Cedar Gap Farms, just south of Abilene, Texas. 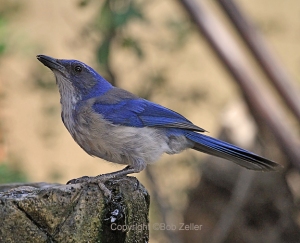 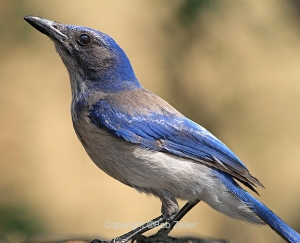 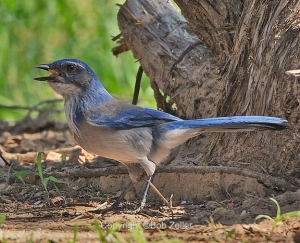