I love going back through my image files and find one that have I ignored for awhile, for some reason or another.  This photo of a juvenile Red-tailed Hawk is one of those.  When I took the original photo, the bird had just took off from atop a telephone pole.  It is impossible to get a perfect composition at that time, and in this case, not only was the pole and wires in the image, I also clipped the wing of the bird.

For a long time the photo languished in my files, ignored because I was hesitant to publish the image.  This photo was taken back in May of 2011 so it has been around a long time.  Recently I decided that I could make a good presentation of it if I ignored the clipped wing and did a decent crop.  Even then, ordinarily I would not have published it with the clipped wing, but after looking at it as an artist should, I felt it was just too good not to show.  Here is the final result.

Photographing raptors, whether it be Ospreys, Hawks, or Owls; I love the challenge of shooting them in flight.  They are such glorious images when in the air. Click on either of them to see an enlargement.

By the way, it was photographed using a very old Canon EOS 40D and 100-400mm lens.  It doesn’t matter about the equipment as long as you know it’s limitations and how to use it.

On one previous post I invited anyone to submit requests if they happened to want to see photos of one particular bird.  So in yesterday’s post, Carolyn Rutherford asked if I had some images of some Northern Bobwhites.  So without further adieu, here is a selection of images of the Northern Bobwhite (Colinus virginanus) that I captured over the past three years.  All were photographed at San Angelo State Park, San Angelo, Texas.  Carolyn, enjoy. 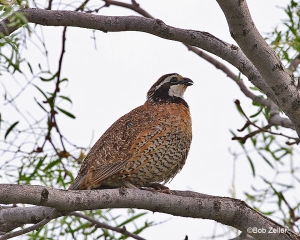 2. Northern Bobwhite in a tree 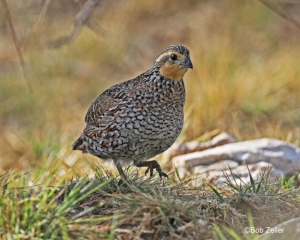 The Yellow Warbler (Dendroica petechia), is not a permanent resident of west Texas.  They only make occasional appearances here during migration.  For that reason, I felt lucky to get to see this one at San Angelo State Park, back in September of 2009.  I was sitting in the blind there when it flew in and entertained me and Ann for a few minutes.

I was going through my Curved-billed Thrasher images this morning, thinking about doing a post.  As I was perusing the thumb-nails, five of them caught my eye.  I realized that those images were different from all the others.  Upon further review, and consulting my bird guides, I discovered it was a Sage Thrasher, (Oreoscoptes montanus).

The Sage Thrasher is quite a bit smaller than the curved-billed, and has a much shorter bill.  I should have taken a closer look at them at the time, but as I always do, I download into my folders then nearly forget about them, until I accidentally come across them again, as I did this time, looking for better images of the Curved-billed.  As it turns out, it is a lifer for me, as I had never seen and identified one before.  We, in this area, are right on the eastern edge of their wintering zone.

First an update:  It has been confirmed that the mystery bird in yesterday’s post was a winter Myrtle Yellow-rumped Warbler.  At first, I considered a Pine Warbler, but after contacting my friend Eric Carpenter in Austin, Texas, he indeed confirmed the yellow-rumped.

That was so much fun getting different opinions on the ID of that bird, I am thinking of maybe having a weekly contest.  Let me think about that. 🙂

So now, to answer Katie (her blog), who commented to my Northern Cardinal post, by asking if I had photos of a female.  Well, certainly, dear Katie, anything to satisfy my readers.  Here are three of my best. 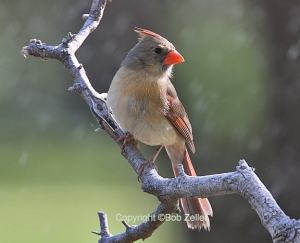 I hope Katie and the rest of you enjoyed these photos.  Anytime that you wish to request certain species photos, if I can accomodate, I certainly will, if I have some presentable photos.

Click on any of the photos to see an enlargement.

I keep going back through my old archives when I have spare time.  Today when I was adding photos to my flickr page, I came across this Northern Cardinal ( Cardinalis cardinalis) image that I had taken with my old Canon 40D back in 2008.

We were sitting in the bird blind at San Angelo State Park, when it flew in and perched atop a desert sumac.  I had my Canon 500mm with a 1/4 tele-converter attached, mounted on a tripod with a Wimberley II gimbal head.  Exposure was 1/500 sec. @ f5.6, ISO 500.  Center weighted metering with aperture priority.

I love the flashy color of the cardinals.  They are one of my favorite birds to photograph because they are naturally photogenic.  Click on the image to see an enlargement.  Also, click on the Flickr logo on the right side of this page and have a look at some other work of mine.

First, before I get into the subject of this post, I’d like to mention that two of my favorite bloggers are down in south Texas for the Rio Grande Valley Birding Festival.  One is David Skinner’s (blog) from Canada.  He reports that during a three-hour hunt yesterday he and his group saw 57, yes, folks that is 57 species.  He said that 11 of those were “lifers” for him.

If you remember, in an earlier post I had mentioned that Ann and I had seen 27 species on a recent outing.  David’s total of 57 makes ours look like childs-play.  I need to get to south Texas one of these days.

Another individual, Linda Rockwell of Photo Feathers (blog) is down there, but in a different tour group.  Check out her photos of a couple of Crested Caracaras.  She said that she will be reporting back later on her results.

Now, about the Dark-eyed Juncos (Junco hyemalis).  These photos were taken at two different times with different equipment. 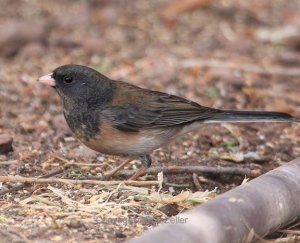 This Oregon Junco was photographed at the Cedar GapFarm bird viewing center in February 2009.  If you have never been there, click the above link to my post describing it.  I was using my Canon EOS 40D at the time.  I had my Canon 100-400 lens attached and hand-held it for this shot.  1/500 sec. @f5.6, ISO 400.  Center-weighted metering at aperture priority.

The Slate-colored Junco was photographed at the X-Bar Ranch in November of 2010.  Another great place to bird.  They have a little patio area next to a copse of trees with a little bubbling fountain.  Many species of birds, and all you have to do is sit back in one of the chairs, sip a refreshment of your choice, and enjoy the different species.  Of course, I passed on the refreshment as I was quite busy taking photographs.

It was getting quite dark when I took this particular photo, as you can see by the ISO of 3200.  I had my Canon 7D on a tripod with my Canon 500mm lens.  Other exposure info: 1/400 sec @ f4, partial metering at shutter priority.

First, this will probably be my last post until I return from my travels to the Big Bend.  We are leaving Monday morning and will return Friday.  Hopefully, I will post something next Saturday.

Digging back through my archives, I again found a few gems that you might enjoy looking at.  These are the Carolina Wrens (Catherpes mexicanus).  I again, photographed these birds at the Hummer House in Christoval, Texas.  I think I will do a post about the Hummer House in the future, since I have been talking about it so much.  Some you that reside here in Texas would probably be interested in visiting.  Carolina Wrens reside here the year around. 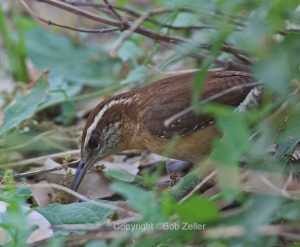 These were all photographed in the spring of 2008.  I had not yet purchased my 7D so I was using my older Canon EOS 40D.  I had it attached to my Canon 500mm lens with a 1.4 tele-converter.  I mounted it on my Manfrotto tripod with a Wimberley gimbal head, and was sitting inside the viewing center.  The images were all captured through the plate glass window.The basic exposures were all identical, aperture priority, center weighted metering, ISO 800, f7.1.  Only the shutter speed varied from 1/125 to 1/250 sec.

In the third photo, you can see the advantage of using only one focus point.  There was considerable grass growth, but I was able to put that lone focus point on the bird with no problem, as you can see.

In the second photo you might notice a metal band on the leg.  Dan and Cathy Brown, the owners of Hummer House, regularly invite the Concho Valley Bird Banders to come and do their work for research.

Well, again, I hope you enjoy these images of another cute bird.  Click on any of them to see enlargements.

National Audubon Society‘s Sibley’s guide to Birds still refer to it as the Rock Dove or (Feral Pigeon).   The third or bottom photo below shows the rare Brown adult.

Third in a series about the dove species that can be found in west Texas.  Inca Dove. Colombina inca).  Smallest of the doves found locally.  Very secretive little bird.  Small, deep-bellied, long-tailed dove with a short neck, small head, and short bill.  Pale gray to sandy colored overall.  All feathers brown-tipped to give a scaled look.  To me, this bird is the cutest of the species.