I got a call from my bird look-out friend yesterday (Saturday) afternoon.  Sue Oliver is an intense birder always watching for anything new to appear.  It was late in the day, but I was ready to go.  She said there were some Canada Geese at a neighborhood park near downtown San Angelo.  Since I am the “have camera, will travel” type of guy I headed out.

When I got there the sun was very low as evening was coming on.  I spotted a few of the geese in the grass, but they were far inside the fence.  This is a private neighborhood park.  They were feeding then, but as we watched they took flight and flew into the pond about 100 feet away.  I drove around the block to the other side of the park which was closer to the water, and it was easier to get a few images there.  Because of the late, low sun, the exposure was difficult.

Granted, the Canada Geese are thought of as nuisances in some cities.  As a matter of fact, one time when we where were visiting relatives near Mackinaw, Michigan, we ventured into a park where there were many mother geese with their goslings following them around.  In trying to get photos I got more than my share of goose poop in and on my shoes. But it was nice to see them here, as they are a rarity around here.

This morning, Ann and I woke early to a beautiful Sunday morning and decided that we would venture to the local parks after partaking of our Happy Meals at the nearby Golden Arches.  After arriving at the Spring Creek Park, we spotted this Red-tailed Hawk high in a tree.  He was facing away, but decided to have a look at me before making his way to more promising hunting grounds. 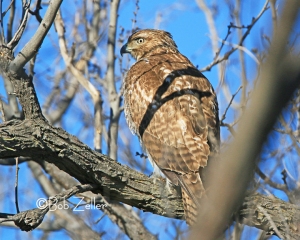 After checking out some other smaller birds that were there, we drove over to Middle Concho Park.  There we drove along the water and got images of a Great Blue Heron and a Great Egret. 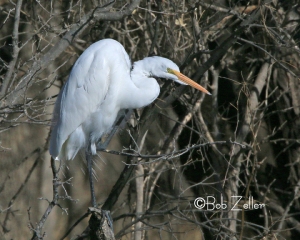 Both birds were across the river and I was able to use my 500mm lens with a 1.4 teleconverter, shooting from my car parked along the near side of the water.

Enjoy the photos and click on any of them to see enlargements.