Oh, back to the lifer.  Ann and I were at O. C. Fisher lake this morning and spotted what turned out to be, a couple of Herring Gulls.  At first I thought they might be California Gulls.  One photo resembled that species.

They were a long way off.  I only had my 100-400mm in my hand.  The wind was blowing about 25mph and it would have knocked my tripod down if I tried to set up the big guy.  So I set the shutter-speed at about 1/1600, zeroed in on them and hand held the camera.  I usually shoot at aperture-priority, but in the wind I wanted to be sure that I had a fast shutter.

The images were very, very tiny so I ran them through Focus Magic software.  I then was able to crop them to a small 4×5 image.  After more finagling around to fine-tune the sharpening, I was then able to use my Blowup enlarging softwaresoftware to enlarge to a usuable 5×7 at 72dpi. 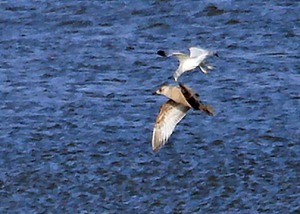 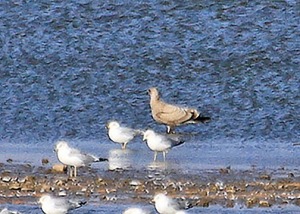 Like I said, the photos aren’t that great aesthetically, but good enough for identification.

In other news, Diane and Mike Coleman thought they may have seen a Northern Shrike.  That would have been a rarity in this part of the state, but not an impossibility.  A lot of rare birds have been making this area a stopping place.  However, they didn’t get a picture, and the Northern and the Loggerhead Shrikes are so similar, it would be hard to say.