Well, we had a grand time this past week visiting the Big Bend area of southwest Texas.  As most of you know, Ann and I visit that place on average of a couple of times each year.  The sights there never fail to amaze us.  The ever changing light in the canyons and mountains, to the varied wildlife that we come upon, whether it is beasts or birds.

On this trip, we hoped to time the bird migration so we might see a few new species.  The winter population hadn’t started to arrive yet, so in one sense the bird numbers were down.  On the other hand with the summer species that were still around and a few migratory ones that were traversing through we saw a total of 59 different birds.  Of those we added three new “lifers”, birds that we had never seen before.  Plus, I got some new photographs of birds that I had photographed on earlier occasions.  The Acorn Woodpecker is a good example of that. 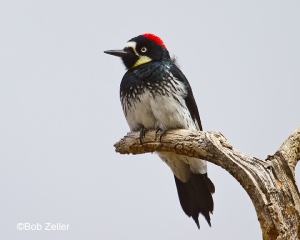 My previous images of the Acorn Woodpecker were taken on a trip to Davis Mountains State Park a couple of years ago.  Of those shots, they were nice close-ups but they were taken in a blind, where they were pictured at bird feeders.  I think you will enjoy these two images as they were taken in the wild, up in the Chisos Mountains of Big Bend National Park.

Ann and I had driven up into the area that is referred to as the ‘Basin’.  It is a valley type area at an elevation of about 5,000 feet, surrounded by mountain peaks.  We parked in the lot by the lodge, and took a stroll down towards the Window Trail.  The ‘Window’ being a V-shaped formation that looks out over the Chihuahuan Desert.  Anyway, along the way there was a dead tree nearby, and the two woodpeckers were there.  One of them was at the very top, the other down on a lower branch.  I was very much surprised that I was able to get so close.  I was using my Canon EOS 7D, with my 100-400mm lens.

I took a few shots from farther away at first, just to be safe and have something.  Then progressively I moved a bit closer, then closer still, until I was only about 20 feet away.  One thing in my favor, was the quietness of the area.  There were no other people in sight.  Probably because of the MOUNTAIN LION ALERT signs that were posted nearby.  But it is naturally quiet up there anyway. 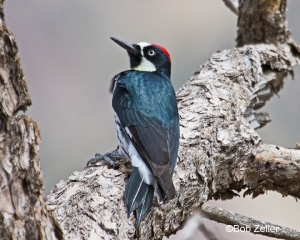 Stay tuned.  In the upcoming few days, I will be posting more photos from our trip.  I hope you will enjoy them.